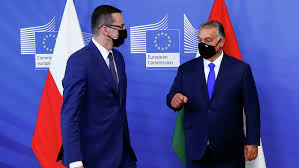 Hungary and Poland voted against the EU plan to voluntarily reduce gas consumption by 15% compared to the average over the past five years for the period from August 1, 2022 to March 31, 2023

These countries were the only ones to oppose this initiative. Thus, Budapest questioned the legality of the EU plans, believing that they affect the energy security of the state. Warsaw, in turn, called the legal basis of the agreement “defective” and said that decisions affecting the energy balance of EU members should be made with the unanimous approval of all countries of the community.

⠀
Nevertheless, the plan was approved because it received a supermajority of votes.

⠀
In accordance with the decision adopted by the Council of the EU, within eight months, states must voluntarily reduce gas consumption by 15%. If a critical drop in supplies occurs during this period, the European Commission, in agreement with the members of the community, can declare a “nationwide alarm“, and this will mean that all EU countries that are not eligible for exemptions must reduce consumption by 15% already without fail, and send all the saved gas volumes for export to the European market.