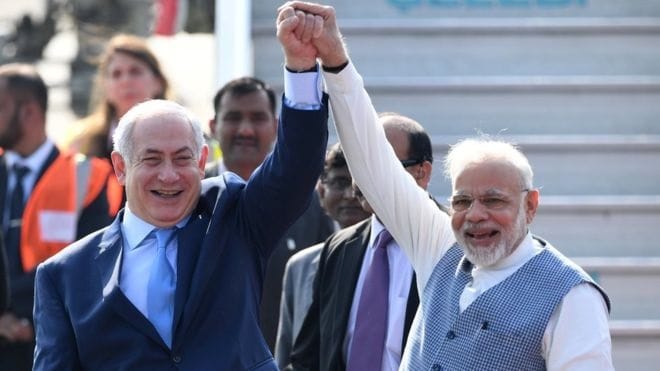 India and Israel’s leaders met in Delhi to discuss the perspectives of the trade deals and issues of the foreign policy.

Israel’s leader arrived Delhi on Sunday for a six-day visit along with a 130-member business delegation. The Middle East nation is charging headlong into warmer ties with New Delhi, India is engaged in a balancing act, in deference to its historical support for the Palestinians.

As Netanyahu and his wife Sara arrived Delhi and stepped on the red carpet, Indian prime minister hugged the Israeli leader and then shook hands with the couple, calling the visit “historic and special”.

Benjamin Netanyahu is only the second Israeli prime minister to visit India and the first since Ariel Sharon in 2003. Executives in technology, agriculture and defence are among those making the journey with Netanyahu as Tel Aviv pursues deals with Asia’s third-largest economy.

Both countries have had diplomatic relations for 25 years, and current Netanyahu’s visit aimed at the signing several memorandums of understanding, including in the field of oil and gas, renewable energy. The national leaders are going to sign the amended protocol for airports, cybersecurity, and co-production of films as well.

Israel’s Saare Tzedek hospital would be signing an agreement with the ministry of health, including the sharing of knowledge in the field of homoeopathy and Ayurveda that have been gaining popularity in Israel over the last few years.