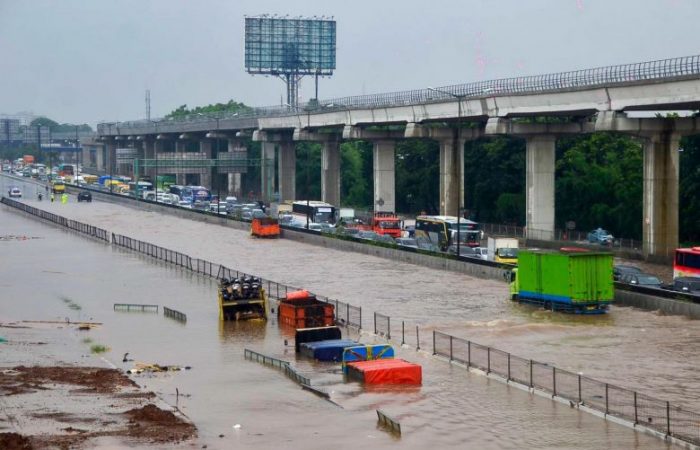 Indonesian authorities announced that flooding and landslide hit Java with unbelievable power, Straits Times reports. The vehicles are trapping on a flooded toll road after heavy rain hit the west region on Tuesday.

Whirlwind has forced almost 10,000 people to flee home in Indonesian West Java province. The situation in its district of Karawang is the worst so far, said a spokesman for the National Disaster Management Agency (BNPB).

Speaking of the consequences of natural disasters, the authorities noted that three school buildings and one mosque are destroyed completely. For agrarians, the flooding and landslide are just a tragedy because 800ha of rice fields transformed into nothing.

The authorities in the district of Karawang are carrying out the evacuation of at least 47,670 residents. As BNPB said on Wednesday briefing, a 14-day emergency was declared. The Meteorological Agency agency warned of heavy downpours on Wednesday.

Meanwhile, the makeshift tents and logistics posts were set up for the affected people. In addition, emergency relief aids such as food and blankets have been sent to the scene while head of BNPB Doni Monardo visited the disaster-hit areas on Wednesday to ensure proper emergency relief.

Both army and police are assisting to the Search and Rescue Office and the Disaster Management Agency are involved in the rescue mission.

The natural disaster in Indonesian West caused by tropical cyclone Esther in the Gulf of Carpentaria of Australia and tropical cyclone Ferdinand in the Indian Ocean. As Indonesia’s Meteorology, Climatology and Geophysics Agency said, cyclones triggered heavy downpours in western Java Island, including West Java province and other parts of the country.