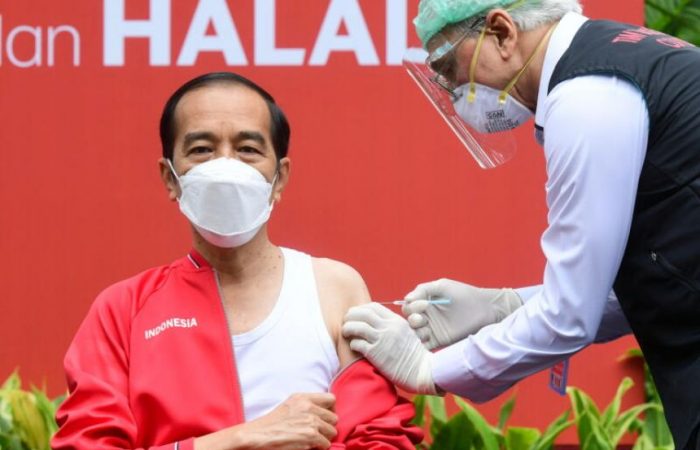 Joko Widodo received his second dose of the covid-19 vaccine, The anti-virus drug developed and made by the Chinese Sinovac Biotech is available across Indonesia.

The second phase of the presidential vaccination took place at his Palace in Jakarta on Wednesday, one day after Indonesia registered more than one million infections. Commenting on the needed in-time vaccination, Joko Widodo said that like two weeks ago, “it is no pain”. The first shot was given to president on Jan 13.

According to scientists, covid antibodies will be optimal in 14-28 days after the second injection.

Nearly 250,000 healthcare workers have been given the first shot since the programme started two weeks ago. The government is targeting the number to increase to between 900,000 and one million daily, Mr Widodo, known as Jokowi, said in a statement on Wednesday.

The Asian giant Indonesia has set a target of giving the corona vaccine to 181.5 million people. the aim is getting herd immunity and end the stubborn corona pathogen.

The first period of vaccination is carried out from January to April 2021, for inoculating 1.3 million medical workers, 17.4 million public workers, and 21.5 million elderly people.

The second period will run from April 2021 to March 2022 to administer the vaccine to 63.9 million vulnerable people and 77.4 million others.

As of Tuesday night, Indonesia added 13,094 new cases, taking the total to 1,012,350, the worst in the Asia-Pacific region. Some 336 people died and 10,868 recovered from the disease over the same period, the government said.