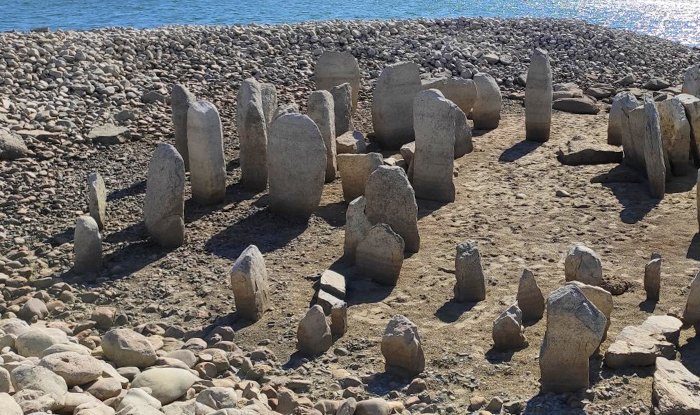 Spain got a new dolmen beneath the waters of Spain’s Valdecañas Reservoir thanks to the intense drought, ScienceAlert reported. For decades, an ancient circle of stones has lain just out of sight but in 2019, abnormally dry summer has naked the tallest pillars, a local 4,000-year-old ‘Stonehenge’.

While the Spanish meteorologists express their concerns about the driest ever summer, the archaeologists are happy with the surprising discovery thanks to the dry weather. Months of intense drought have now caused the reservoir’s waters to fall — enough to reveal the structure in its entirety.

The drought has given the brilliant opportunity to revive research on the circle’s archaeology, there’s now debate over whether the upright pillars, or orthostates, should be moved or left for rising waters to reclaim once more.

According to the researchers, the 150 stones arranged in an oval are referred to as the Dolmen of Guadalperal. Built by Copper or Bronze Age locals on the banks of the Tagus River, it’s thought to be at least 4,000 years old.

The dolmen wasn’t a full surprise to the archaeologists, indeed. In 1920s, the ancient site was rediscovered by the German anthropologist Hugo Obermaier. He had analysed the architecture and its surrounding mounds of 4,000-year-old pillars. However, by the 1960s, the ancient place had all but vanished from view.

Spanish ‘Stonehenge’ should be relocated for scientifical purposes

The rediscovered ‘Stonehenge’ resembles the roughly hewn megaliths of Britain’s notorious place. Probably, it could well have served similar purposes. According to Obermaier’s researches, the ancient place had a handful of personal items among the rock piles, suggesting it could once have been a burial site or at least, a sacred place.

Angel Castaño, the president of the local Roots of Peraleda Cultural Association, suggests that Dolmen of Guadalperal was something of a commercial and cultural centre of the area.

«All my life, people had told me about the dolmen,» Castaño says and insists the stones should be relocated somewhere safe, both for further research and to bolster their local tourist industry.