14 : 06
Somalia warns Kenya to stay out of its internal affairs
13 : 31
US Coast Guard “doubles down” on Pacific operations targeting China
12 : 55
Canada to no longer pay for Prince Harry, Meghan Markle security
19 : 39
African Union to deploy 3,000 troops in Sahel region
19 : 00
Japan to close all schools until April amid Covid-19 fears
14 : 31
Pope Francis cancels one event ‘because of a slight indisposition’
More news 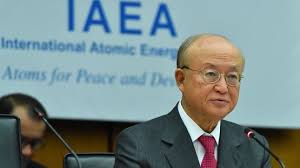 Under the deal, Iran has been closely monitored by inspectors from the IAEA, which on Monday verified «that Iran is enriching uranium above 3.67%.»

Behrouz Kamalvandi, a spokesman for Iran’s nuclear agency, confirmed the increased enrichment. «At the moment our enrichment is at around 4.5%,» Kamalvandi said and also suggested using new or more centrifuges, which are limited by the deal.

While IAEA doesn’t specify how much beyond the threshold Tehran has gone, President Trump warned that «Iran better be careful.» The US leader’s advise also comes just days after the Islamic Republic acknowledged breaking the 300-kilogram limit on its low-enriched uranium stockpile, another term of the accord with the world powers.

According to the IAEA, enriched uranium at the 3.67% level is enough for the Iranian peaceful pursuits but is far below weapons-grade levels of 90%. At the 4.5% level, it is enough to help power Bushehr reactor, Iran’s only nuclear power plant.

The US Vice President Mike Pence promised that the White House will not waiver from its course of maximum pressure against Iran and «will never allow Iran to obtain a nuclear weapon».

UN Secretary-General commented on the situation with Iran. According to Mr Gutteres, Tehran’s action would neither help preserve the nuclear agreement «nor secure tangible economic benefits for the Iranian people,» according to UN deputy spokesman Farhan Haq.