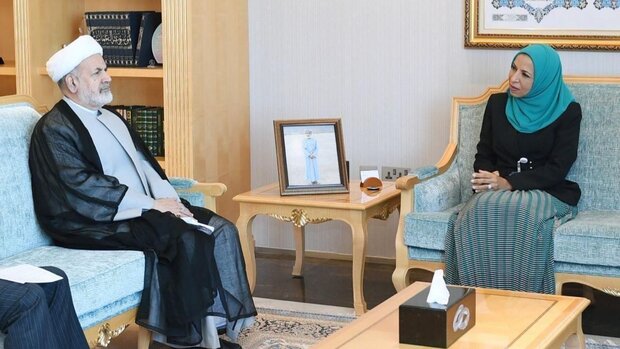 The officials from Iran and Oman have discussed the ways of boosting cooperation in the field of academic education, MEMO reports.

The educational cooperation between the two Arabian countries was a central topic of discussion during a meeting between Ambassador to Muscat Mohammad Reza Nouri-Shahroudi and Oman’s Education Minister Madeeha bint Ahmed al-Shibaniyah. The officials have met on Wednesday.

Referring to a memorandum of understanding (MoU) signed between the two countries on reestablishing a Persian Language Teaching Center in Muscat, he said that good efforts have been made in this respect and it will hopefully be reopened.

The Omani minister also welcomed enhancing mutual ties between the scientists and researchers of both Arabian countries. She expressed her readiness for visiting Iran and closely seeing the country’s educational achievements.

Wednesday meeting wasn’t the first discussion on strengthening ties between the countries. In December, amid intensifying the cooperation efforts, Iran and Oman have agreed to reach $5 billion bilateral trade volume by 2020 provided that the necessary infrastructures are provided and banking problems are resolved.

The Omani and Iranian business officials expressed hope to remove barriers to the development of bilateral relations between the two Arabian states.