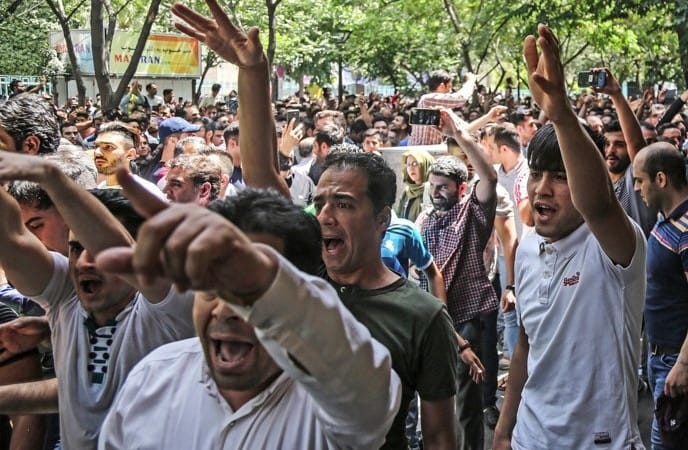 Around Tehran’s Grand Bazaar, thousands marched towards the gates of parliament. Some traders shut up shop for the day willingly, and state news said others were forced to by angry protesters, Independent reports.

Iran’s government heightened its crackdown on social media and messaging services in order to curb dissent. On Monday, merchants joined demonstrators by shutting down their shops and marching in the capital’s biggest civil protest since 2012, when internationally imposed sanctions began to devastate the Iranian economy.

Economic sanctions against Iran were lifted in the 2015 nuclear agreement in exchange for curbs on its nuclear program. Trump’s desire to pull out from the deal in May has stewed fears of renewed US sanctions, which are set to return in August. Moreover, that presidential decision has led to the collapse of the rial to record lows against the US dollar in unofficial exchange markets.

Iranian national leader said in a speech, blaming the fall in the rial’s value on “foreign media propaganda”.

“Even in the worst case, I promise that the basic needs of Iranians will be provided. We have enough sugar, wheat, and cooking oil. We have enough foreign currency to inject into the market,”

In fact, Trump’s decision to lull out from the deal has plummeted the value of the Iranian rial, driving up the cost of imports for many ordinary businesses and consumers. The merchants who protest around Tehran’s Grand Bazaar feared threatened new sanctions from Washington will cut into Iran’s hard currency earnings from oil exports.