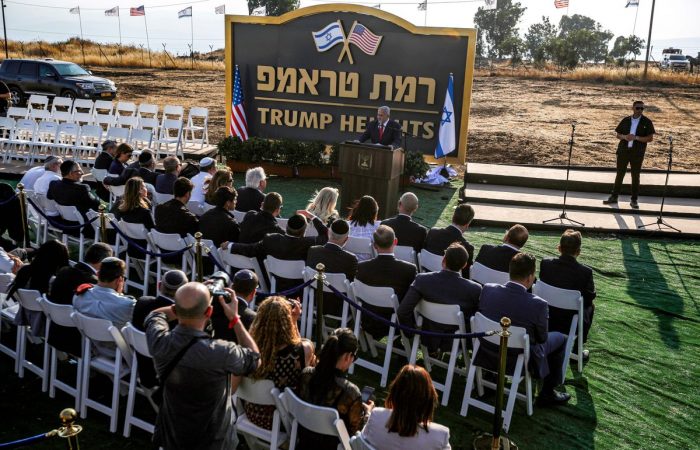 The Golan Heights’ settlement got a new name, since today, the official name is Trump Heights. As Guardian reported, an Israeli settlement in the strategic volcano plateau had been globally shunned over decades, and the new name will definitely not resolve the old problem.

The Golan heights built on land captured from Syria in a war fought half a century ago, it is some of the most contentious real estates on the planet.

According to Israel, the strategic volcanic plateau that overlooks Lebanon, Jordan and the Sea of Galilee, has been rebuked by the UN and never internationally recognised. Syria, however, has its own vision, which collides Israeli’s one.

To thank his benefactor, the US President, Benjamin Netanyahu said he would name a tiny settlement after ‘friend of Israel’. On Sunday, the Israeli PM and his cabinet convened in the tiny outpost for the inauguration of its new title, emblazoned on a giant billboard: “Ramat Trump” – or Trump Heights.

Donald Trump thanked Netanyahu with another tweet, saying that is a great honor.

According to Israeli’s media, there were plenty of options on how to re-name the settlement. The government committee for approval was established for making the final choice. Other possibilities had included Neve Trump (Trump’s Oasis) and Ruakh Trump (Trump’s Soul). However, The laconic Trump Heights won.

Despite the Israeli’s move, most of the international community disputes that issue of the Golan Heights. Israel captured it from Syria in the 1967 Mideast war and annexed it in 1981 – a move deemed illegal under international law.