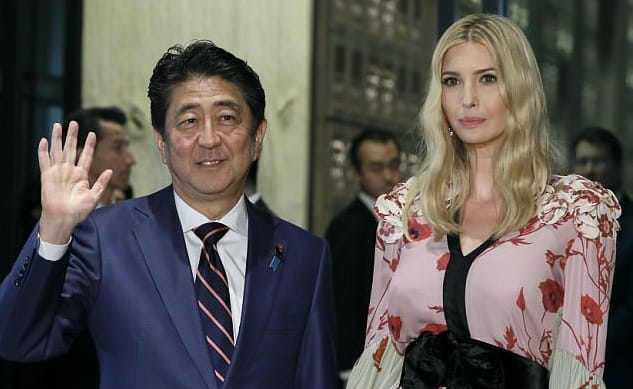 Ivanka Trump paid hommage during her visit to Japan, for dinner with Prime Minister Shinzo Abe on Friday, the first daughter opted the kimono.

Ivanka’s $1,995 kimono-inspired dress made in Italy by designer Johanna Ortiz especially for the occasion. Thus, the first daughter showed her respect to Japanese culture during the dinner with the head of government on Friday.

Ivanka Trump arrived Tokyo on Thursday, on the first day of her trip to Japan, she gave a speech about female entrepreneurs and women’s role in the economy at the World Assembly for Women 2017 earlier in the day. One day after she spoke out against harassment of women in the workplace, specifically highlighting sexual harassment which she insisted ‘can never be tolerated’.

Mother-of-three spoke about the sexual harassment amid growing attention to Hollywood sex-scandal, she stressed that inappropriate sexual conduct creates a toxic environment.

According to the first daughter, the cases of the sexual assault and the examples of any inappropriate conduct should be a discussable issue. That can help to identify the predators and to stop them.

Thanking for the warm welcome, Ivanka wrote on her Instagram:

‘An unforgettable last night in Tokyo! ‘Thank you Prime Minister Abe for the warm hospitality and the belated birthday wishes.’