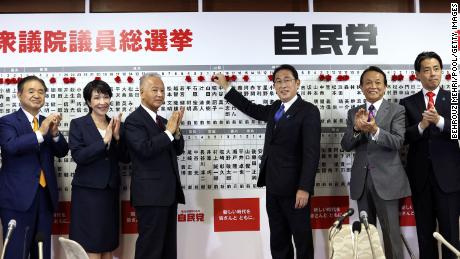 Japan’s government will lead a new prime minister Fumio Kishida who surprisingly won the race. The 57-year-old Kishida, a soft-spoken former banker, has hewed to traditional policies of the party’s right wing, pushing to increase military spending to counter a more assertive China.

On Monday, PM Kishida would make full use of his surprisingly strong election win as he tackles major policy decisions, including trying to pass an extra budget to accelerate the recovery from the health crisis.

Additionally, stocks surged to a one-month high on relief the Liberal Democratic Party (LDP) on Sunday held onto its single-party majority in defiance of predictions.

The results are likely to embolden Kishida, only in power a month and with little yet to show in terms of policy successes, allowing him to put his stamp on the office ahead of an 2022 upper house election.

“We won a majority, which I think in this election was significant,” the new PM told reporters and added he wants to make full use of this both in running the government and running parliament.

Moreover, Kishida is likely to maintain the diplomatic policies of his predecessors, strengthening ties with key ally Washington. Regarding domestic policy, PM has promised to address wealth inequality, touting a “new capitalism” as the world’s third-largest economy struggles to rebound from the coronavirus pandemic.

Meantime, the experts believe if Japan is in a post-corona and post-Abe era, then the question is what are the new policy agendas that the nation has to face, not just in the next year or two but long-term.