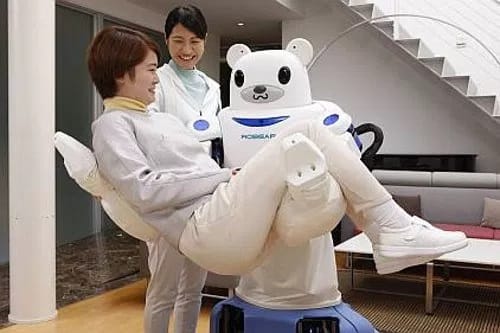 Japan’s ageing society welcomes the idea of the digitalised care, the elderly are being told to get used to being looked after by robots. By 2020, androids will care for 80% of elderly, Japan’s National Institute of Advanced Industrial Science and Technology said.

The technologies in Japan are growing day by day, the modern smart robots are able to care for the elderly people, this aspect is extremely important to Japan. Its ageing society faced a predicted shortfall of 370,000 caregivers by 2025, the government wants to increase community acceptance of technology that could help fill the gap in the nursing workforce. The new generation of robots is easing the burden on nursing staff and boosting the autonomy of people still living at home. The human service robots just become companions!

To meet the requirements, the developers have focused their efforts on producing simple robotic devices that help frail residents get out of their bed and into a wheelchair, or that can ease senior citizens into bathtubs or to use the toilet.

Dr Hirohisa Hirukawa, director of robot innovation research at Japan’s National Institute of Advanced Industrial Science and Technology, said that robotics cannot solve all of these issues; however, the smart robots will be able to make a contribution to some of these difficulties.

According to Dr Hirukawa, lifting robotics had so far been deployed in only about 8% of nursing homes in Japan, partly because of the cost and partly because of the “the mindset by the people on the frontline of caregiving that after all it must be human beings who provide this kind of care”.

“On the side of those who receive care, of course initially there will be psychological resistance,”

The sensors of the latest robot model’s detect if the user is going uphill and a booster function is activated. When the walker is detected going downhill, an automatic brake kicks in to reduce falls.

“In Japan we already have motor-supported bicycles so it is like a version of an assist for walking,”

Hirukawa said during a demonstration at the Foreign Press Center Japan. According to Japan’s robot strategy, the government hopes that four in five care recipients accept having some support provided by robots by 2020.