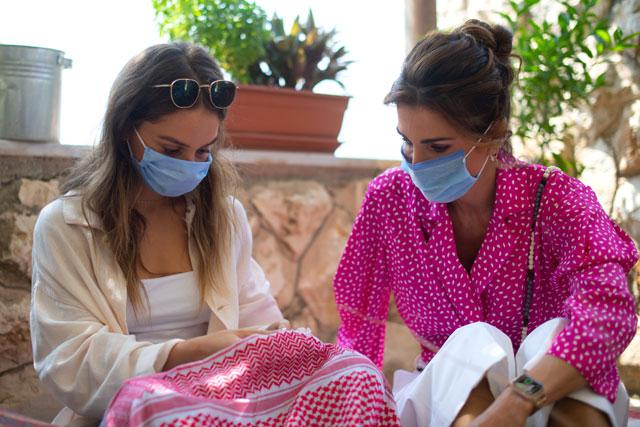 Being the queen of one of the most beautiful countries of the Arab world, Rania voices her support for development of sustainable tourism. Following the unexpected lockdown, Queen and her daughter Princess Iman have visited the picturesque village of Umm Qais in the governorate of Irbid.

Her Majesty Queen Rania wants to know more about the opportunities for maintaining sustainable tourism in the governorate of Irbid. As Jordan Times reported, HM accompanied by HRH Princess Iman visited the village of Umm Qais on Monday.

Both royals’ visit aimed at stimulation economic growth and protect Jordan’s cultural heritage and natural resources. Upon their arrival, queen and princess were welcomed by the founder of Baraka Destinations, Muna Haddad.

At Beit Al Baraka, Queen Rania and Princess Iman attended a session on basket weaving and traditional Jordanian scarf embroidering, designed to introduce tourists to this tradition. Another educational session was dedicated to Eid cookies at Galsoum’s Kitchen.

The Queen and Princess also passed by the Bed and Breakfast’s living room to take a look at items produced by locals, and stopped at a stone masonry class on traditional rock carving, before learning about local plants and making seed bombs at Beit Al Ward.

Located in the heart of Umm Qais, Beit Al Baraka overlooks prominent landmarks including the Golan Heights, the Sea of Galilee, and the Yarmouk Nature Reserve. It houses six bedrooms and offers guests a farm to table breakfast.

Baraka Destinations is an initiative that works with communities in Jordan and 130 families in Umm Qais to promote lesser-known touristic sites and provide visitors with purposely-curated cultural and touristic experiences.