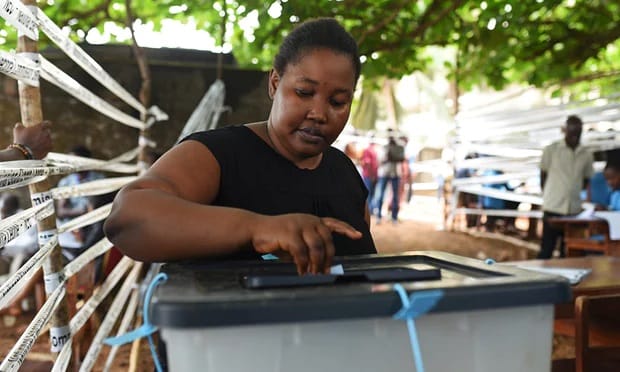 Sierra Leone welcomes its new president, the former soldiers won the presidential race despite the fact the campaign was characterised by ugly verbal exchanges and even sporadic violence. Julius Maada Bio was accusing the APC of using police to intimidate his party.

Julius Maada Bio is an opposition challenger who was able to win the presidential election in Sierra Leone, The ex-soldier secured his first term in office as a civilian after being declared the winner. The election was rather controversial, but Bio won 51.81% of ballots election, according to official results released on Wednesday.

The March vote’s results were published only on Wednesday, results had been delayed by a dispute over the method of tallying that left ballot papers from 11,000 polling stations uncounted. Sierra Leone got a new president who briefly led a military junta more than two decades ago.

During the presidential campaign, Mr Bio beat incumbent Samura Kamara, who secured 48.19% of the vote. That victory ended a decade in power for All Peoples’ Congress (APC) whose leader is  Kamara. The poor west African nation is waiting for a new era with the new president.

Julius Maada Bio, a straight-talking retired brigadier, has blasted the government’s closeness to China, while Kamara had presented himself as a continuity candidate.

Earlier on Wednesday, reports emerged of Kamara supporters marching in the capital Freetown, tearing down Bio posters and alleging “foreign meddling” in the vote.