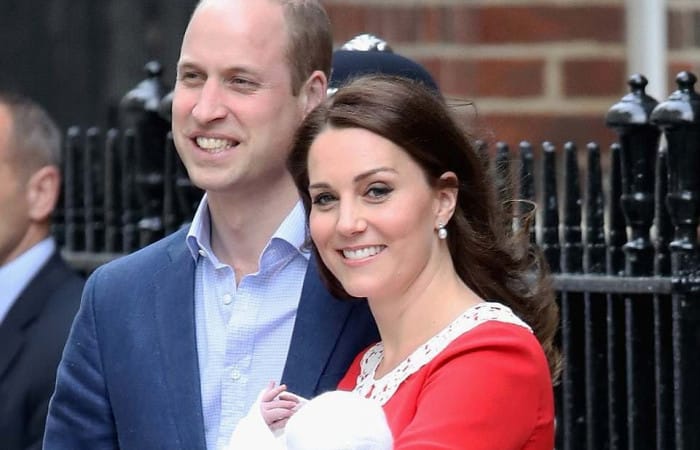 Duchess Kate is facing the world just hours after giving birth to the third baby, the new mum looked gorgeous in the red dress by her favourite British designer Jenny Packham on the steps of the Lindo Wing at St. Mary’s Hospital. Kate preferred to wear a pair of Jimmy Choo Gilbert nude heels, what a brave mom!

Kate Middleton looked impeccably stylish this evening as she left St. Mary’s Hospital on Monday in a red shift dress. The 36-year-old mom-of-three opted for a bespoke creation with a white lace collar as she showed off her baby boy who is the fifth on the throne line.

The fashion experts noted that Kate appeared to may a subtle but sweet tribute to her late mother-in-law Princess Diana, who wore a very similar outfit when she left the same hospital after giving birth to Prince Harry in 1984.

On Monday, Kate’s personal stylist Natasha Archer was seen leaving the hospital after reportedly dropping off Kate’s outfit. Ms Archer always helped the Duchess’s meticulously plan her outfits for official engagements and overseas tours, the birthday of her third child is also a very important day in the lives of all royal family’s members.

Kate Middleton as a trendsetter for all new mums

In fact, Kate’s the red dress was just a perfect option, taking into account that April 23 is St George’s Day! What better day to fly the flag than on a festive day and next to William in blue with the newborn Prince swaddled in white, a red dress was the perfect choice for Kate.

A simple tunic dress is ideal for mums post-birth, offering comfort and ease but I’ve no doubt Kate will break out the luxe loungewear when back at home with William and the children, away from the world’s media. No need to say that within hours of her appearance on the steps of the Lindo Wing, similar dresses by Jenny Packham had sold out.

Being an experienced trendsetter, Kate Middleton has a great impact on the sales. Duchess’ fans were clearly impressed by Kate’s ability to manoeuvre down the hospital steps in a pair of Jimmy Choo Gilbert nude heels so soon after giving birth, as sales of similar shoes also spiked by 131 percent. Likewise, newborn princess Charlotte Elizabeth Diana soon became a trendsetter at less than one-week-old, sending white blanket sales up by 149 percent.