Kate Middleton looks ready to be queen at the NATO reception 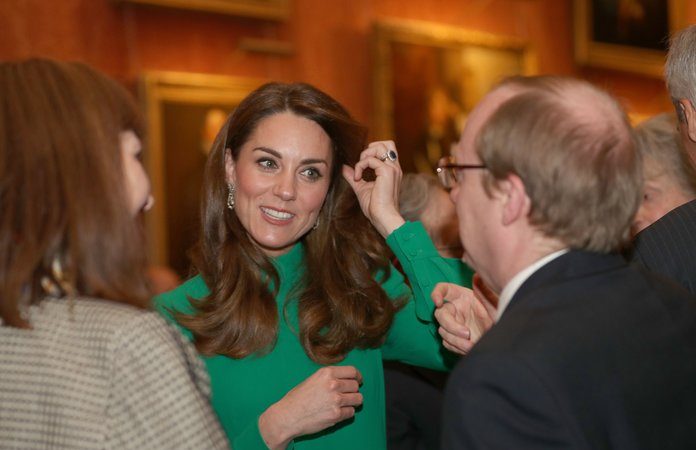 Kate Middleton takes another her royal duty while she was attending the NATO reception at the Buckingham Palace. For that occasion, Duchess of Cambridge opted Emilia Wickstead green dress, Today reports.

Kate Middleton used to practise for her future role as Queen, and another important event a the Buckingham Palace went smoothly thanks to Duchess’ readiness to follow the protocol.

On Tuesday evening, the Duchess of Cambridge assisted Queen Elizabeth II by chatting with a group of NATO leaders during a reception held at Palace. While Prince William’s wife had to take on this royal duty without him by her side, there were some other royal family members in attendance to celebrate 70 years of North Atlantic Treaty Organization (NATO).

The future king, Prince Charles, and Camilla, Duchess of Cornwall were also in attendance as well as the Duke and Duchess of Gloucester, Prince Edward, and Princess Anne. There were no signs of attendance of another Queen’s son, Prince Andrew who preferred to step down his royal duties last month. The recent sex scandal with Jeffrey Epstein’s protegees has spotted the BRF’s reputation a lot.

Kate Middleton was flawless as never before at NATO event

Duchess Kate has a habit of picking out classics from her closet for these sorts of occasions, but this time might be different. Prince William’s wife looked flawless while wearing simple but elegant Emilia Wickstead dress.

Discussing Kate’s choice for NATO reception, fans claim that Middleton’s dress is not only still available to purchase, but is also on sale (for $780). Probably, the royal family members preferred not to draw attention after the recent scandal with Prince Andrew.

The deep green colours are extremely suitable for Kate Middleton, the experts said. Taking into account Duchess’s ability to wear any ensemble in an elegant way, the NATO reception proved again that she is looking very confident and, in fact, is ready to be queen.