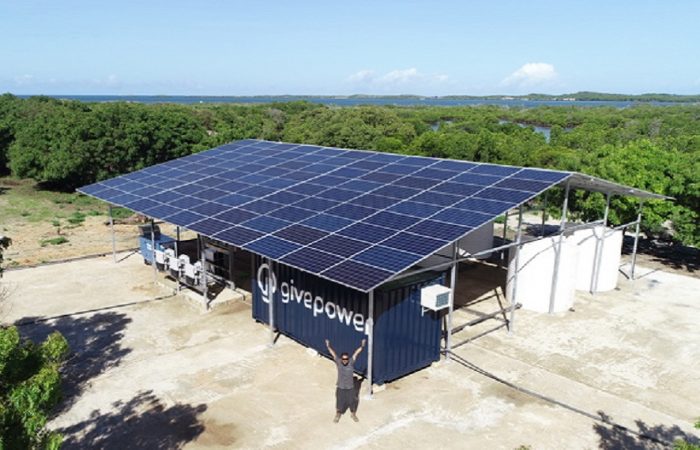 An NGO Give Power supplies the village of Kiunga on the Eastern coast of Kenya with the potable water thanks to the innovative system, Solar Water Farm sited by the Indian Ocean. It turns salt water into drinkable one for local Kenyans.

Since 2018, Give Power operates in Kenya, the most important step is building the solar floating farm that gives electricity for the water pumps. Thanks to that green energy complex, Kiunga residents supplies over 25,000 people daily with fresh potable water, the most precious resource in Africa.

“With our background in off-grid clean energy, GivePower can immediately help by deploying solar water farm solutions to save lives in areas throughout the world that suffer from prolonged water scarcity.”

In many corners of the African continent, drinking water has always been a problem confronting rural inhabitants, especially in sub-Saharan Africa where children are forced to give up their education in order to walk miles every day to fetch water for their families.

To convert the ocean water into drinking water, the NGO has built a Solar Water Farm sited by the Indian Ocean in Kiunga, a region which has seen extreme drought for many years and denying the 3,500 residents accesses to hygienic drinking water.

With $20 per person, the farm provides 20 years of access to clean water and it is reportedly helping the local economy.

“You have to find a way to pull water out of the ocean in a sustainable way,” the president of GivePower, Hayes Barnard said with the hope to open similar facilities in other areas.

Using its solar panels, the Solar Water Farm harvests solar energy which are able to produce 50 kilowatts of energy and power two water pumps that run 24/7 and it turns salty water safely into potable water for residents of the village and its vicinities..

According to the WHO, two billion people currently live in water-scarce regions and as many as 3.5 billion could experience water scarcity by 2025.