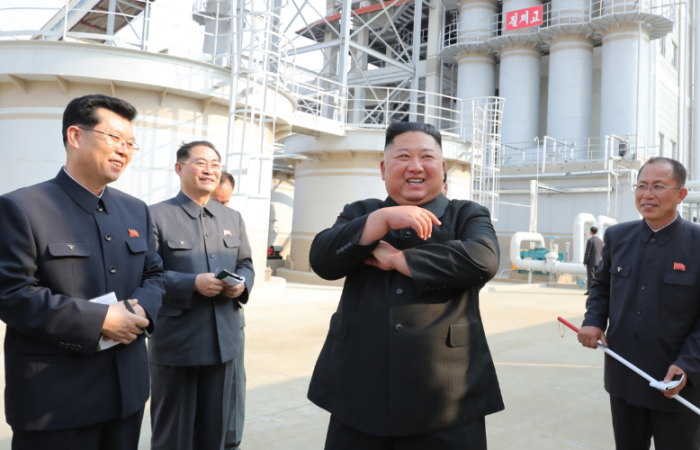 Kim Jong Un appeared on Friday at a ribbon-cutting event at the Sunchon fertilizer factory, the Korean Central News Agency (KCNA) reported. After 21 days of absence, the state-run media say about the national leader and his activity.

The North Korean leader’s first public appearance in state media in 21 days was registered on Saturday. According to KCNA, while the international media speculate about the whereabouts of the DPRK leader, he had conducted the inspection visit on Friday, to mark May 1’s International Labor Day.

However, the report made no mention of Kim’s health — the subject of substantial media speculation in recent weeks.

For North Korea, May 1st is one of the most important days to celebrate. Of course, Mr Kim was joined by his sister, Kim Yo Jong, as well as top officials to celebrate Labour Day. The NK leader reportedly cut the ribbon at the ceremony, last visited the facility in the outskirts of the capital city, Pyongyang, in January.

Speaking at the opening of the factory, he hailed the project as the “first success” of last December’s 5th Plenary Meeting of 7th Central Committee of the Workers’ Party of Korea (WPK) and its goal of having the country “break through the barriers” imposed on it by sanctions and economic pressure.

“He set forth the tasks and ways for developing our chemical industry in a correct orientation as required by the new century including rebuilding and updating fertilizer factories as a whole, and building more chemical industrial bases,” KCNA reported.

Photos of Kim Jong Un at the event did not show any notable signs that the DPRK leader might be in particularly bad health, though they did show him standing in front of a golf cart — also seen following his extended disappearance from public view for health reasons in 2014.

Over three weeks, the US had appeared reluctant to officially comment on the rumours on bad health or even death of Mr Kim. Meantime, South Korean officials repeatedly insisted that nothing was amiss in the North and that the DPRK leader was staying near the east coast city of Wonsan.