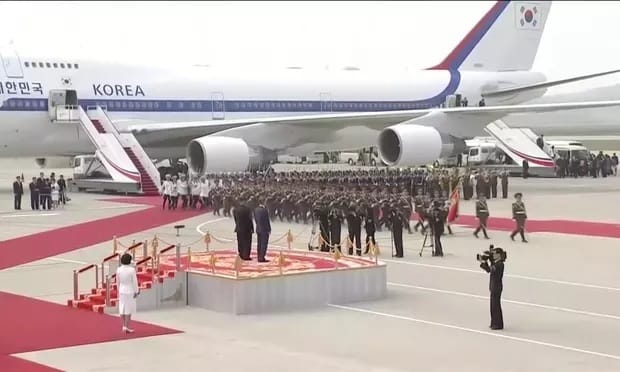 President Moon is only the third South Korean leader to visit North Korea’s capital for a meeting between the two countries since the end of Second World War. The Korean leaders are keeping the intensive pace, this year, they have met each other twice. Mr Moon said he is pushing for “irreversible, permanent peace” and for better dialogue between Pyongyang and Washington during “heart-to-heart” talks with Mr Kim.

Kim is likely looking for greater economic cooperation with the South and seeking sanctions relief as well as a formal end to the 1950-53 Korean war, which ended in an armistice.

In the first meeting between Mr Kim and Mr Moon in April, the two leaders agreed to a “complete denuclearisation” of their peninsula. After two previous meetings, the nuclear diplomacy between the US and North Korea has stalled and questions have been raised about how serious Mr Kim is after his vague commitments to denuclearise.  The follow-up to the June summit was scuppered in August when US secretary of state Mike Pompeo cancelled his trip to North Korea.

The crowd appeared bored as they waited but then seemed almost hysterical at the sight of Kim. The entire ceremony lasted about 15 minutes before Moon and Kim drove off in a caravan of black cars and the crowd quickly returned to its previously calm state. Kim was accompanied at the airport by his wife, Ri Sol-Ju, and his sister and close adviser Kim Yo-jong. Both women opted for the traditional Korean costume hanbok.