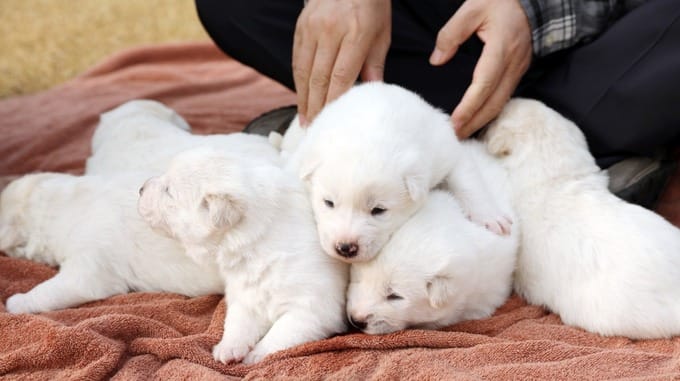 When Kim Jong-un was sending two Punsang dogs to his counterpart Moon Jae-in, one of the ‘peace gifts’ was pregnant. South Korean President announced on Tuesday that Gomi gave birth to three female and three male puppies earlier this month.

To promote peace on the Korean peninsula, both leaders have been exchanged the peace gifts last month. One of the gifted by Kim Jong Un dogs, a Pungsan hunting dog, gave birth to six healthy and beautiful puppies in November. this week, President Moon shared the first pictures of puppies mothered by one of North Korea’s “peace gift” dogs.

The South Korean presidential office shared photos of the pups on social media, saying: “Here are Gomi’s baby pups born on November 9. Mother pup and six babies are all very healthy.” In local media, the newborn little dogs were tagged as ‘puppies of peace’.

It is worth to note that the Pungsan are said to be designated “national treasures” in North Korea, so, such a gift is very symbolic. South Korean leader wrote on Twitter when the puppies where born: “As the pregnancy period of dogs is about two months, Gomi must have been pregnant when she came to us.” He also expressed hope that the relations between North and South Koreas will be “like this.”

Pungsan is the rare dog breed, which originates in a mountainous region of the North, is the most-prized dog breed in North Korea.