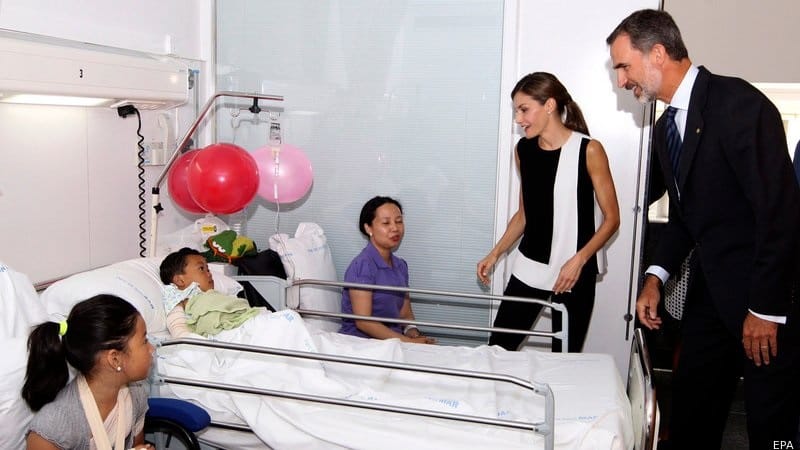 King Felipe VI, Queen Letizia of Spain visited the Mar de Barcelona Hospital, where the injured victims are being treated. The royal couple shook hands with hard-working doctors and nurses and thanked them for their excellent skills that saved lives more than 130 patients who were injured in the atrocity on Las Ramblas.

The King and Queen of Spain have been leading the country in mourning, and King Felipe led a minute’s silence in the Placa Catalunya on Friday. The terror attack in Barcelona injured more than 130 people who were comforted personally at their hospital beds by King Felipe VI and Queen Letizia of Spain.

The appearance of the royal couple made a lot for patients, they were proud and happy to see King and Queen of Spain beside their beds. The kind-hearted Queen Letizia wished the soon recovery to every victim of the terror attack, while King Felipe expressed hope that such an atrocity like Barcelona explosion will never happen again.

Barcelona and the entire world were shocked by the tragic news about the terroristic attack on Las Ramblas in central Barcelona on Thursday. At least 14 people were killed and 130 injured. The doctors and nurses of the Mar de Barcelona Hospital did their best to save the lives of the victims, many of injured are children.

Queen Letizia accompanies her husband while his visiting to the hospital, both them wore black outfits – three days of mourning have been declared by the government of Catalonia earlier.

On Friday, Barcelona halts at noon as a minute’s silence was observed in the Placa Catalunya, close to the scene of the attack. Led by King Felipe and Spanish prime minister Mariano Rajoy the silence was then followed by applause for the victims.