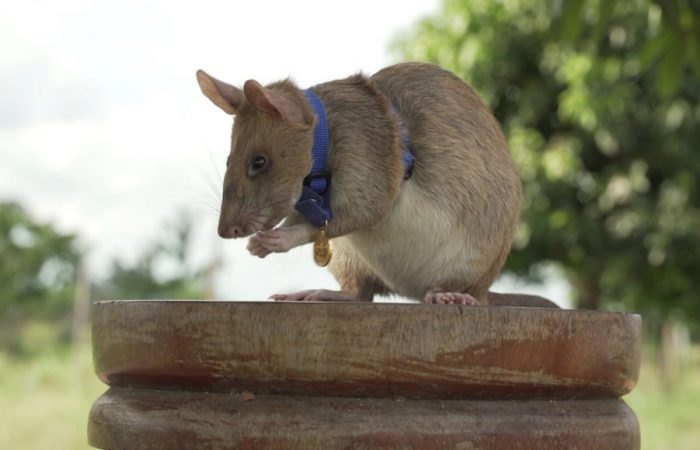 Rat Magawa has cleared 39 landmines in an area the size of 20 football pitches. The smart rodent has been awarded the People’s Dispensary for Sick Animals (PDSA) gold medal, the animal equivalent of the George Cross, The Telegraph reports.

Magawa becomes the first rat in the charity’s 77-year history to receive such an award, veterinary charity director general Jan McLoughlin said. The work of Magawa and APOPO is truly unique and outstanding.

APOPO is the Belgian NGO which trains southern giant pouched rats to detect landmines and tuberculosis. They call their trained rats ‘HeroRATs’. Their rats are able to detect not only landmines but tuberculosis too.

A giant African pouched rat Magawa has discovered 39 landmines and 28 items of unexploded ordnance since he was trained by charity APOPO. That is why the rodent has been awarded a gold medal for his «lifesaving bravery and devotion to duty».

He is the PDSA’s most successful Hero Rat, having cleared more than 141,000 square metres of land — the equivalent of 20 football pitches. As an illustration, Magawa has been formally recognised for his work and been presented with a miniature PDSA Gold Medal.

APOPO is proud of their HeroRATs

All APOPO-trained rats detect a chemical compound within explosives, and because they ignore any scrap metal laying around, they work even faster than a metal detectorist.

Christophe Cox, chief executive of APOPO, noted that receiving a gold medal is really an honour for their training centre.

«Especially for our animal trainers who are waking up every day, very early, to train those animals in the morning. But also it is big for the people in Cambodia, and all the people around the world who are suffering from landmines. The PDSA Gold Medal award brings the problem of landmines to global attention,» Cox added.

Over the years, brave Magawa has sniffed out 39 unexploded landmines over the course of his career. In fact, rats are «intelligent» and will work at repetitive tasks for food rewards better than other animals.

Rats size means they are in less danger when they walk through landmine fields.

The rats are trained to detect landmines as well as tuberculosis and require a year of training before they are certified. They work for around half an hour a day, in the early morning. Once they detect a landmine, they scratch the top, which alerts their human handlers.

Magawa, who is now nearing retirement age, can search the area of a tennis court in 30 mins, something that would take a human with a metal detector up to four days.

Magawa receives a treat, such as a banana, after every landmine he discovers. His work directly saves and changes the lives of men, women and children who are impacted by these landmines. Every discovery he makes reduces the risk of injury or death for local people.

«Cambodia estimates that between four and six million landmines were laid in the country between 1975 and 1998, which have sadly caused over 64,000 casualties.»

«Magawa’s dedication, skill and bravery are an extraordinary example of this and deserve the highest possible recognition. We are thrilled to award him the PDSA Gold Medal,» PDSA director said.

A virtual presentation for Magawa will take place on Friday and can be viewed online.