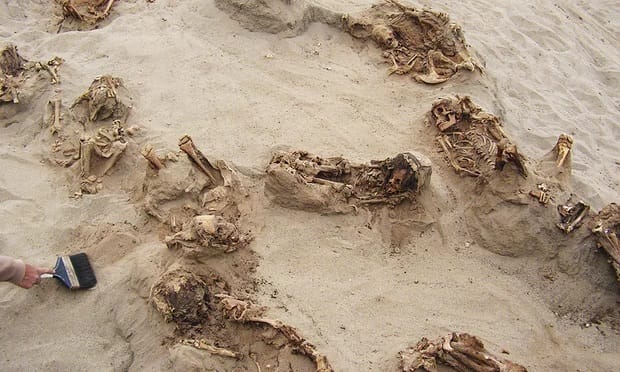 The skeletons of more than 140 children were found in Peru during an excavation site formally known as Huanchaquito-Las Llamas, UNESCO reported.

The Peruvian site where archaeologists have discovered the largest child sacrifice in history was controlled by the Chimú Empire some 550 years ago. According to the National Geographic, the children ranged in age from 5 to 14, the baby llamas were less than 18 months old.

“Skeletal remains of both children and animals show evidence of cuts to the sternum as well as rib dislocations,”

the National Geographic says in an exclusive published on Thursday.

Based on evidence from layers of dried mud, the report states it’s believed that all the human and animal sacrifices took place at the same time. The three adults found had blunt-force trauma to the head and no grave, leading scientist to believe they, too, were part of the sacrifice.

The researcher said the children were buried facing the sea, while the llamas faced the Andes mountains to the east. The burial site was apparently built by the Chimú empire. It is thought the children were sacrificed as floods caused by the El Niño weather pattern ravaged the Peruvian coastline.

Gabriel Prieto, a Peruvian archaeologist, who grew up in the area, was excavating an ancient temple there in 2011 when people who lived near coastal dunes told him they were seeing bones.

“I remember in the first hour or two hours we found like 12 or 13 complete bodies and from there we knew we were in an important site and that we had to call other archaeologists because it was beyond our possibilities at the moment,”

he said and added that kids were found that these were no ordinary remains.

According to Peruvian archaeologist, many of the children had faces that were caked with red pigment, sternums with cuts and ribs that had been dislocated — suggesting that their hearts had been removed. The researchers also found the remains of 200 juvenile llamas that also appear to have died in ritual killings.