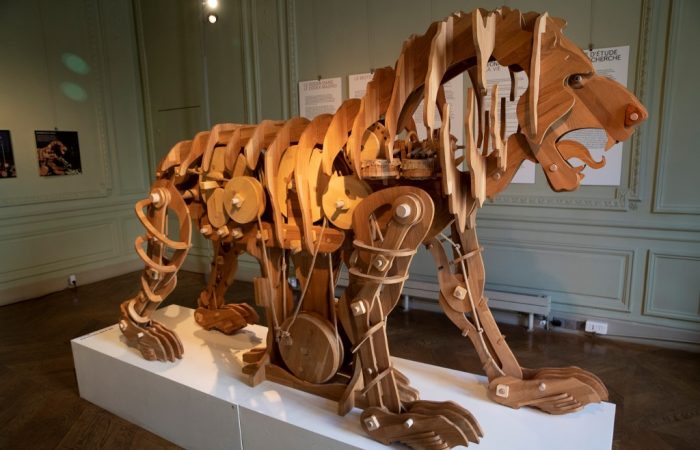 Leonardo da Vinci’s famous walking lion will be displayed in Paris for a month. In 2019, the European cultural institutes are marking the Italian genius 500 years after his death, The Local France reported.

The unbelievable lion made y Leonardo da Vinci five centuries ago has two metres high and three metres long. The installation made of wood with a metal mechanism, that is a reconstruction based on a rudimentary sketch left by the gifted Italian engineer and inventor. The iconic installation is on display at the Italian Cultural Institute in Paris until the mid-October.

The original automaton, long since lost, was designed by da Vinci on a commission from Pope Leo X to amuse French king Francois I. That monarch from Valois dynasty became his patron and close friend in the last years of artist’s life.

Thanks to the financial support of the French Crown, the Italian genius got a brilliant opportunities to realize his extraordinary projects and ideas. One of the most amusing and breath-taking is a walking, mechanical lion, the chest of which would open, to reveal a cluster of lilies, a symbol of France.

The Renaissance polymath left behind a legacy far beyond the Mona Lisa and the Last Supper. Da Vinci, a masterful artist, was also an unrivalled scientist, anatomist and architect, inventing technologies so advanced as to be unrealisable during his lifetime. In fact, he was the brightest ever visioner of his time.

By most accounts a handsome, charismatic and good-humoured man, Leonardo’s private life appears to have been tumultuous, and, at a time when it was illegal, he was probably gay.

Da Vinci, who died in May 1519, had a legendary obsession with the flight of birds and how understanding the mechanism could lead to the creation of a human flying machine.

The Italian Cultural Institute in Paris agreed to send the 500-year-old lion to Paris for the exhibition.