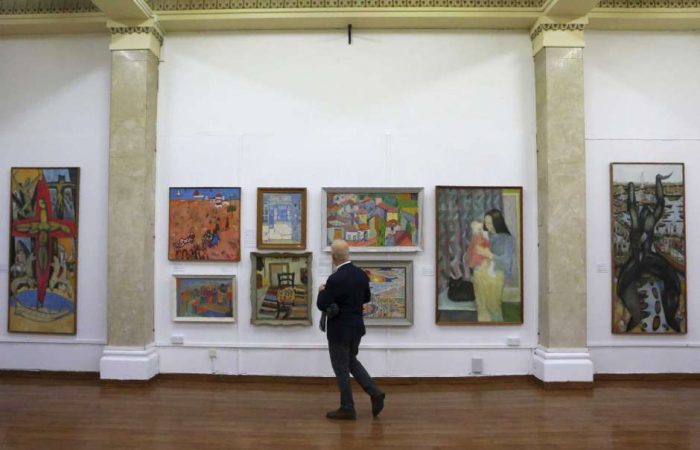 After almost a half of century, the most significant works produced by Greek Cypriot artists have gone on display again. Many of these works were believed to lost after the dramatic events on Cyprus in the 1970s.

Cyprus’ iconic paintings have gone on display after more than 45 years. According to officials, the paintings are of incalculable artistic value but some could carry price tags well into six figures.

A sample of the paintings were unveiled at an exhibit Monday at a disused hotel straddling the U.N-controlled buffer zone that cuts across the capital of Nicosia. According to both sides, art and cultural exchange can tangibly contribute to efforts of achieving peace and reconciliation.

In fact, among 219 works there is one work by artist George P. Georghiou, the most prominent painter. His oil-on-plywood painting encapsulates the Greek Cypriots’ armed uprising against British colonial rule during the latter half of the 1950s that culminated in the Mediterranean island’s independence.

As Yiannis Toumazis, a senior Greek Cypriot official explained, that is is some of the most prized modern art in Cyprus and Greece. The special committee does its best to foster trust through culture between the divided island’s Greek Cypriot and Turkish Cypriot communities.

“To see the paintings returned was one of the most sentimental moments of my life,” said Androula Vassiliou, the committee’s Greek Cypriot co-chair.

Cypriot cultural exchange is getting stronger

“The common language of art, which is universal, serves as a unifying force,» he said.