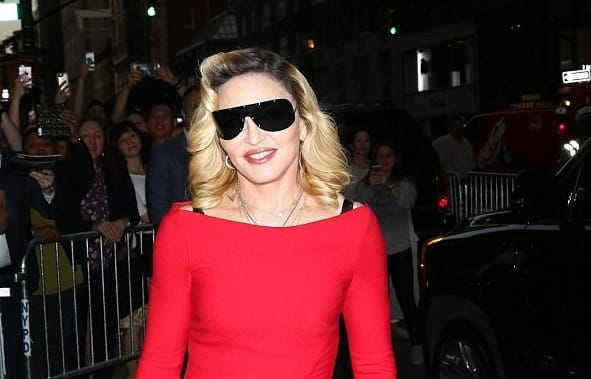 Madonna is a very gifted person who is living in the multitasking mode. The pop star proved she is able to insult the people, to launch MDNA Skin cosmetic corner in Ney York and to send the kisses to her fans at the same time.

The superstar Madonna made happy all her admirers as her fans stormed Barneys to catch a glimpse of the Material Girl in New York on Tuesday. It is worth to note that a day earlier, Madge hilariously skewered Kim Kardashian with an imitation on Jimmy Fallon.

For the launching of the MDNA Skin corner, Madonna donned the scarlet apron dress with the black and red satin bomber jacket. Once inside, Madonna dared to impress as she rocked a French maid-inspired ensemble replete with satin apron and lace gloves.

Actually, Madonna likes to have some fun, her ability to mocking people is known to everyone. So, the singer just stopped by The Tonight Show With Jimmy Fallon on Monday evening and mocked the 36-year-old Kim Kardashians.

During a Lip Flip session with Jimmy, the Grammy winner was asked to pretend she was Mrs Kanye West when entering a party. The blonde said: ‘Hiiiiiiiiiiii’ in an annoying, spoiled-girl tone.

Kim Kardashian didn’t comment Madonna’s joke, probably, the producers of the KUWTK decided it is good for Kim and their family show.