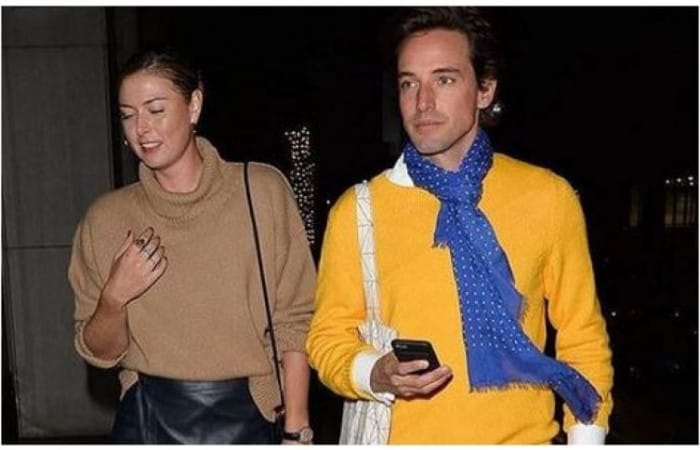 The Russian tennis star lost in Indiana Wells this week but she was happy in her private life, the former queen of Wimbledon showed her new boyfriend Alexander Gilkes. He is young, well-educated, rich and best-connected Briton. If Maria Sharapova ever dreamed of a real royal connection, she has struck gold.

For Maria’s latest flame appears to be an Etoneducated multimillionaire who was a guest at the royal wedding of Kate Middleton and Prince William. Moreover, the 38-year-old auctioneer Alexander has many other royal connections, he is a friend of Sarah Ferguson, used to employ her younger daughter Princess Eugenie. Gilkes’ ex-wife is Meghan Markle’s favourite designer as well as her friend.

Mr Gilkes is understood to have become friends with Prince William when they were both at Eton and is also said to be close with Prince Harry, who also went to the school.

Will Maria Sharapova get an invitation to the royal wedding in May?

The wedding of Miss Markle and Prince Harry in May are going on, the main intrigue is the list of invitations. The Russian athlete has a chance to be included on the secret list thanks to her new well-connected beau. Miss Sharapova might get to go as Alexander Gilkes ‘plus one’.

This week, Sharapova and Gilkes were seen holding hands recently as they visited an art gallery in Beverly Hills and made no attempt to hide their closeness from the cameras.  Although that was the first clear hint of a potential romance between them, they were also spotted together at Los Angeles airport in January.

However, if Miss Sharapova, who won Wimbledon in 2004, does go to the wedding of the year in May it could lead to some awkwardness among guests. Serena Williams is expected to attend as she is a close friend of Miss Markle – but the US tennis ace has a notoriously fractious relationship with her Russian rival.