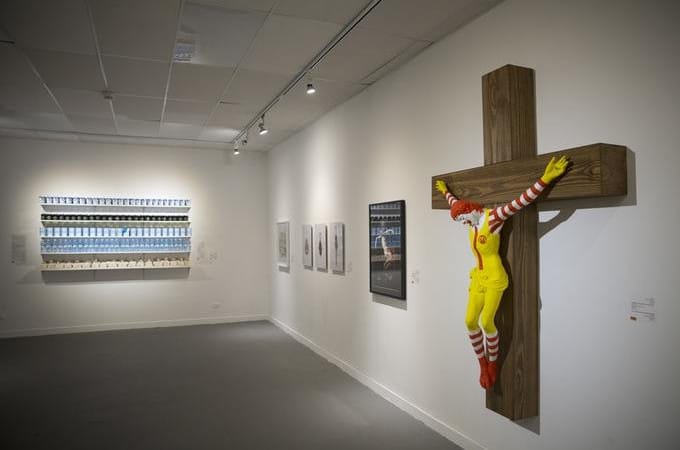 Israeli Christians got furious when the Haifa Museum of Art showed the controversial exhibition, which central part takes a state of McJesus – a crucified Ronald McDonald, ITV reported. Eruptions among local Christians took place following claims police had not responded to demands to have the controversial piece ripped down.

Haifa police have to block furious Christian demonstrators forcing their way into to destroy the statue of McJesus they have blasted as “disrespectful”. In fact, the artwork is very provocative and disgusting, so, the confrontations were the result of a flurry of complaints made in August about the artwork that depicts the McDonald’s clown mascot and was made by Finnish artist and political activist Jani Leinonen.

haifa Museum refused to remove McJesus altogether and added the artwork aroused discussion among its audience.

The local Catholic priest demanded the McDonald’s-themed crucifixion piece be closed down, saying: “We denounce the exhibition and the injury to the holiest symbol of Christianity by an institution that is supposed to serve citizens of all religions,” Rev Archimandrite Agapious Abu Sa’ada said.

The confrontations between Haifa police and local Christians who demand to close McJesus exhibition lead to five arrests. A spokesperson for the Haifa Museum of Art said they would put up a screen or shield the McDonald’s-themed crucifixion piece from public view with a sign warning the artwork could be deemed offensive.

Finnish political activist Jani Leinonen said the statue was made to reflect how society worships consumerism, however, the artist is known for his provocative works and behaviour. For an instance, in 2011, he stole a Ronald McDonald statue outside a McDonald’s restaurant and threatened to behead it if the corporation did not explain its ethics.