Meghan Markle joins Queen for first engagements together in Chester 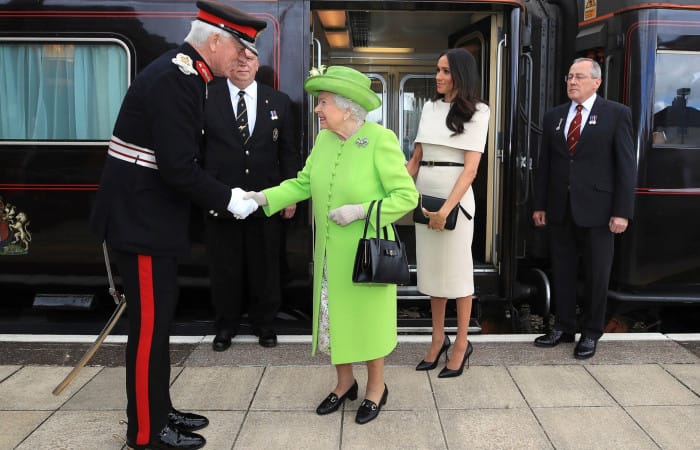 Meghan Markle, a new Duchess of Sussex, is lucky because Her Majesty took Harry’s wife as a royal companion during Chester visit. For Ms Markle, it was the first engagements together with Queen.

For Meghan Markle, the royal visit to Chester was an introduction into The Firm. In other words, it was quite the welcome for Prince Harry’s wife to the royal family. The Queen offered the Duchess the wisdom of her lifetime of experience in an “away day” to Chester, the first time the former actress has made a public visit without her husband.

Three plaques, eight posies, one royal train later, and an unmistakably significant gift from the Queen herself, and the Duchess of Sussex had passed her masterclass in the day-to-day life of the Royal family with flying colours.

Queen Elizabeth was so supportive to Meghan that underlined her sympathy by giving the newlywed a pair of pearl and diamond earrings as a gift, according to Buckingham Palace. All eyes were on Duchess Meghan, the first time she has joined the Queen for an event without her husband, as she began to get to grips with her new role of the ribbon cutting and plaque unveiling, under the watchful eye of the 92-year-old monarch.

The monarch and her new granddaughter-in-law appeared to enjoy each other’s company during their day of public engagements together.

At her second engagement opening a new bridge across the River Mersey in Widnes, Cheshire, the Duchess seemed to have found her stride – deep in discussion with the Queen and sharing a joke.

Runcorn residents were happy to see Queen and her new granddaughter

Huge crowds had cheered as the Queen and Duchess of Sussex arrived in Chester. But everything stopped at noon when they both stood in silence along with other dignitaries and crowds of well-wishers outside the Storyhouse theatre.

Meghan Markle followed on the heels of the Queen, beaming and wrapping her hair behind her ears as Union flags and the US Stars and Stripes fluttering in the wind. She showed only a moment’s hesitation as the royal party were led to their waiting car to depart for their first engagement.

The Duchess was shown to the open door of the waiting car but appeared hesitant to get in before the Queen, who she consulted first before climbing aboard, followed by the monarch.

The Duchess of Sussex beams at the crowd in Chester as she accepts a bunch of flowers. She and the Queen were handed posies by Lilya Fagan seven, from Newton Primary School, and Aneiran Egan-Simon, six, from Oldfield Primary.