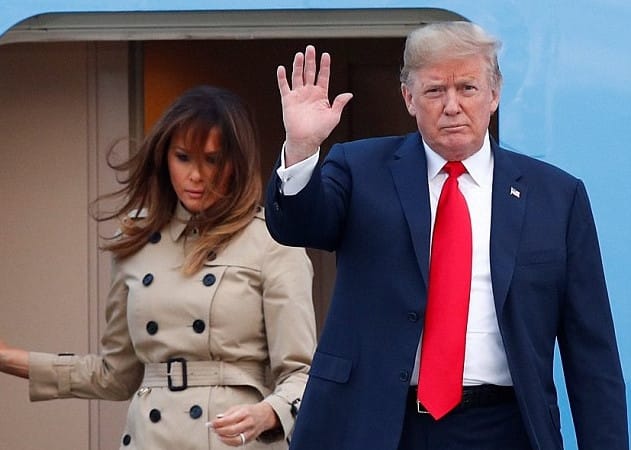 Melania and Donald Trump have arrived in Brussels on Tuesday, the first couple is scheduled to spend in Europe one week, Daily reported.

The First Lady opted for  Belgium’s weather a beige Burberry trench done up tightly, but a gust of wind revealed she was wearing a navy pencil skirt underneath. Donald Trump looked dapper in his classic navy suit as he arrived in Europe for the first evening of the official visit. According to the White House, Trumps will head to the UK at the end of the week.

Melania’s The Long Kensington Heritage Trench costs £1,450, the fashion experts say. FLOTUS paired the beige trench with a pair of killer heels from Christian Louboutin, and the red soles that make Louboutin shoes easy to spot from afar and were well-coordinated with husband’s tie.

The only jewellery Melania wore is her diamond-encrusted wedding band on her left hand, the 47-year-old first lady looked impeccable even with the minimal makeup: heavy smoky eye and lashings of bronzer.

Trumps’ trip to Europe: Melania, Donald to meet with Queen

During the staying in the UK, President Trump and his wife Melania are scheduled to have dinner at the opulent Blenheim Palace, home of the Duke and Duchess of Marlborough. The first couple will then journey to Buckinghamshire, where they will meet with Theresa May at Chequers, a sprawling country manor house used by UK prime ministers.

It is Grade I listed and on the National Heritage List for England, with beautiful landscaped parks and gardens. Topping off her visit, Melania is even set to meet the Queen. For both of Americans, it will be the first meeting with the longest-reigned monarch.

‘So I have NATO, I have the UK which is in somewhat turmoil, and I have Putin. Frankly Putin may be the easiest of them all. Who would think?’