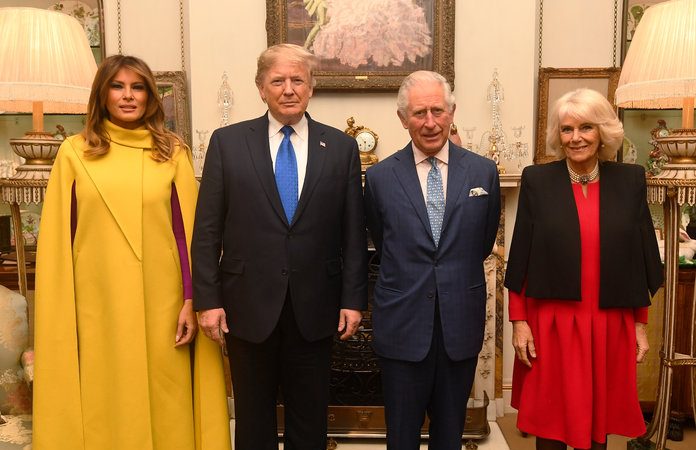 Melania and Donald Trump arrived in London where they took part in the NATO reception at the Buckingham Palace, AOL reports. On Tuesday night, the first couple of America met with Queen Elizabeth and Prince Charles, the royal family have welcomed the US President and fellow NATO leaders to Buckingham Palace.

Trumps landed in London last night for the 70th-anniversary summit with Alliance leaders. On Tuesday night, all them were guests of the British royal family that hoss a reception dedicated to NATO’s jubilee.

For Melania and Donald Trump, the two-day visit across the pond was started from a visit to Clarence House, where they joined Prince Charles and Duchess Camilla for tea. Later, the US president and his wife went into town to meet with NATO leaders. A reception hosted by Queen Elizabeth at Buckingham Palace took place on Tuesday night.

While Mr Trump dressed with a blue tie for the occasion, Melania opted a more vibrant look. Her school bus yellow cape coat by Valentino definitely stole the show. The former model paired the bright coat, which retails for $7,700, with violet «So Kate» stilettos from Christian Louboutin and her go-to blowout.

«We have the most gorgeous @FLOTUS in the history of this country,» wrote Melania’s fan on Twitter.

During the most recent visit to London, Melania and Donald Trump also had joined Prince Charles and Duchess Camilla for tea. That time, the biggest moment of the meeting was «cheeky» wink from the Duchess Camilla.