Melania Trump, Donald Trump to welcome the Australian Prime Minister and his wife to the White House 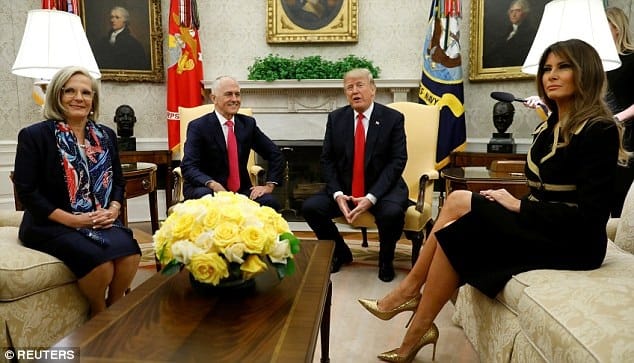 Donald and Melania Trump welcomed the Turnbulls to the White House on Friday. Traditionally, the first American couple wasn’t photographed holding hands at any point during Friday’s visit.

The scandal was so heavy for both wife and husband that last month, the pair arrived separately to his State Of The Union address, breaking with tradition.

This Friday, though, Melania and Donald put on a united front. President Trump and prime minister Turnbull shook hands before going inside for meetings, a working lunch and a joint news conference.

Relations between the president and the Australian head of government got off to a tumultuous start shortly after Mr Trump took office.
They sparred over a contentious telephone call over a plan for the U.S. to accept refugees that had been agreed to by former President Barack Obama.

Joe Hockey, Australia’s ambassador to the US, says the two leaders ‘understand each other’ now and enjoy each other’s company.
According to Hockey, the former businessmen share a ‘common language’ while Melania and Lucy Turnbull had a wonderful conversation, too.