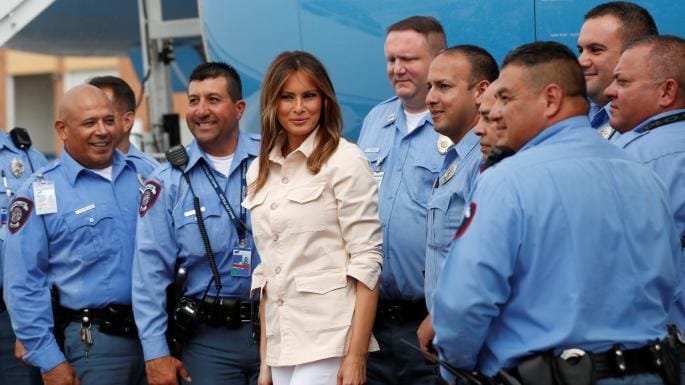 Melania Trump’s jacket caused a stir on social media, the first lady wore a jacket that read “I really don’t care, do u?” as she boarded a flight to Texas facility housing migrant children separated from their parents. FLOTUS’ choice of the jacket became an annoying surprise, ITV reports.

Mrs trump’s khaki military jacket from Spanish brand Zara had the words written graffiti-style on the back. Hours after the photo of her departure outfit went viral, FLOTUS again donned the jacket to disembark from the plane at an Air Force base outside Washington DC.

“It’s a jacket. There was no hidden message. After today’s important visit to Texas, I hope the media isn’t going to choose to focus on her wardrobe.”

Later, Ms Grisham underscored that message in a tweet with the hashtags #SheCares and #ItsJustAJacket.

But President Donald Trump offered his own interpretation in a tweet, saying it “refers to the Fake News Media. Melania has learned how dishonest they are, and she truly no longer cares!”

The first lady travelled to the city of McAllen, on the US border to show the caring face of the White House. The first lady’s trip to Texas happened just hours after her husband abandoned a policy that had removed more than 2,300 children from undocumented parents.

Melania Trump had been struck by the photos of children being separated from their parents and locked up “as a mother, as a human being”.