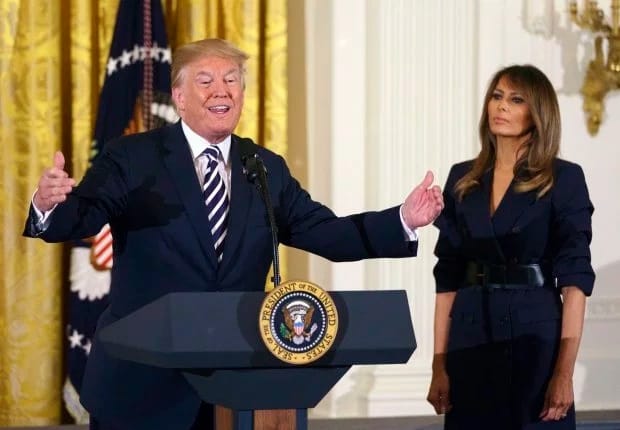 Melania Trump has not been seen in public for almost three weeks, even her spokesperson Stephanie Grisham, known for posting updates and keeping tabs on the whereabouts of the first lady, Politico reported.

FLOTUS, Melania’s official Twitter account, posted a message of thanks to the team that cared for her at Walter Reed Medical Centre, but little has been posted about her current state. On Wednesday, after three weeks of her public and online absence, Melania tweeted:

The First Lady tweeted Wednesday: ‘I see the media is working overtime speculating where I am & what I’m doing. Rest assured, I’m here at the @WhiteHouse w my family, feeling great, & working hard on behalf of children & the American people!’

So far, it is not clear whether or not Melania will accompany Donald on his state visit to Canada this June. According to the medical experts, that surgery such as Melania’s should usually result in an immediate, same-day discharge, causing many to wonder why she is taking such an extended time off.

Mrs Trump was last seen in person four days earlier as she and her husband welcomed home three Korean-American men who had been held by North Korea. First Lady expert Katherine Jellison, a history professor at Ohio University said that the president’s wife is free in her moves and desire to be a public person. It’s just become the modern norm and expectation that we know:

‘It’s unusual over the course of the past 50 years for a first lady not to be in public view, and, when she is out of the spotlight for a prolonged period, not to tell people what’s going on. There’s no guidebook to being first lady. It’s not an elected office, and she’s not under any obligation to tell us,’