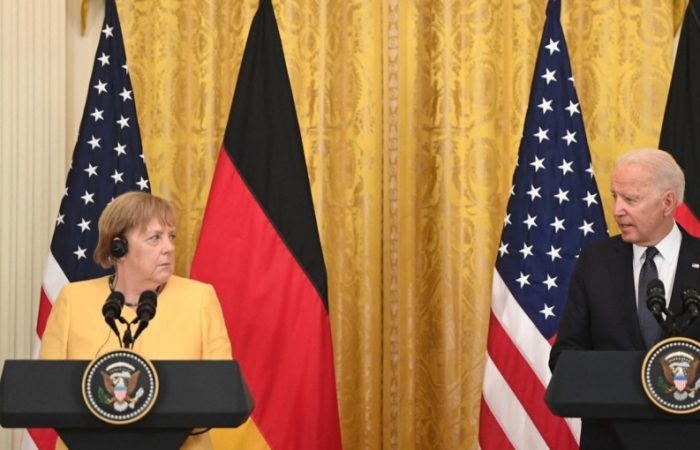 The German Chancellor arrived in Washington to pay her farewell official visit. Joe Biden and Angela Merkel continue discussions on how to deal with the “Russia problem” but failed to find a common ground on Nord Stream 2 pipeline.

The US President Biden continued to thrash out his foreign policy while Chancellor Merkel tried to find a diplomatic solution that could allow Russia to bypass Ukraine during a meeting of the two leaders on July 15.

In political terms, the need for the pipeline is the main bone of contention between the US and Germany, Reuters said. While Berlins supports Ukraine, the White House has been trying to block the construction of the pipeline NS2 and hopes to boost its sales of LNG to Europe.

During their discussion, the two leaders vowed to stand together against Russia’s plan and promised even more sanctions as Russia escalates its aggression against Ukraine. Additionally, Washington and Berlin also promised to present a united front against Beijing.

«I value the friendship,» Merkel said of Germany’s relationship with the US in the Oval Office.

Commenting on the results of the meeting, Biden said Russia should not use energy as a geopolitical weapon.

For Ukrainian President Volodymyr Zelenskiy, the meeting in Washington is an indicator after he met with the German leader earlier this week. Ukraine had been hoping that Germany would take a tougher stance against the construction of Nord Stream 2 and has relied on the USA to bring pressure on Berlin to stop the construction. Those hopes seem to have come to nought.