Michelle Obama and Hillary Clinton campaign together for the first time

Michelle Obama is supporting Democrat Hillary Clinton, both Americans launched the joint campaign together, on Thursday the former first lady was speaking at an event in Winston-Salem in favour of Mrs Clinton.

Michelle Obama and Hillary Clinton has joined their efforts, both women are enough popular and smart, so their tandem is pretty logical. Moreover, many Americans guess whether the former first lady is running for the presidency in 2020. 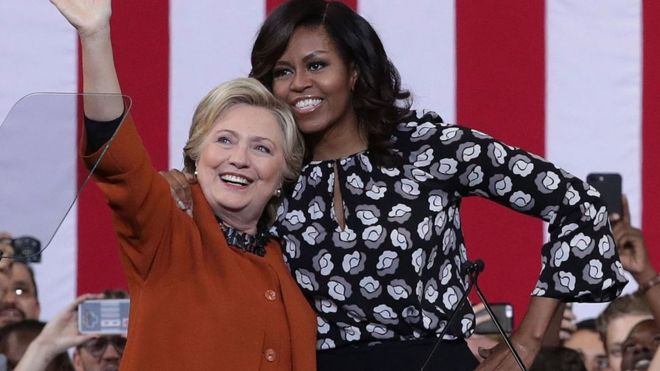 Michelle and Hillary during the US presidential campaign, July 2016

In recent month, Mrs Obama has become one of Clinton’s top campaign surrogates, which gives Clinton high approval ratings and additional popularity. The Gallup data says Obama has a 64 percent favorability rating, even Bill Clinton and Melania Trump can not vain of such strong people’s love.

“It was Michelle Obama who had the last word at a rally on Thursday afternoon after being introduced by Hillary Clinton. The First Lady took more time to speak than Clinton did, and it was the First Lady who received longer and more effusive praise from her partner on stage,”

the Time commented Obama-Clinton tandem. Michelle is still a popular person, especially among youth and millennials. Many Americans really miss her, while the certain fraction hopes for her running for the presidency in 2020.