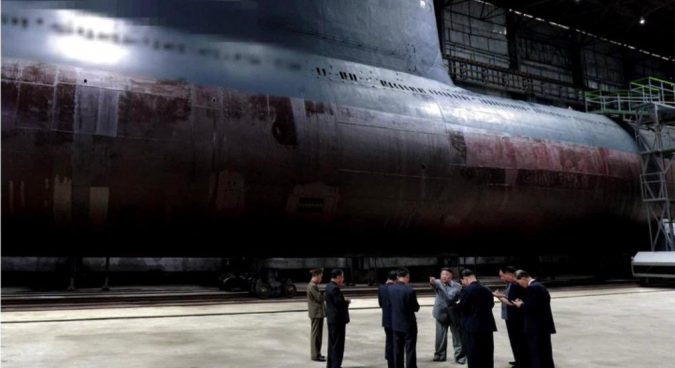 The officials from the South Korean Ministry of National Defense (MND) were said to believe the submarine will be deployed soon. The briefing came just hours after the North was reported to have launched two ballistic missiles off its east coast.

Last week, Kim Jong Un has visited an undisclosed factory where the new NK submarine is going to be assembled soon. The experts from Seoul said that the new North Korean vessel inherited some features from Sinpo/Gorae-class ballistic missile submarine (SSBA) and dubbed the “Sinpo-C”.

Kim Jong Un is happy with the new submarine

The North Korean leader looked happy during his recent visit to the factory, he even “expressed great satisfaction” about the construction of the new submarine. DPRK’s leader said it is an integral part of the national defence and promised its deployment in the nearest future.

South Korea’s military experts say that the new submarine capable of carrying three ballistic missiles. Despite the vessel is in the pre-launch stage, it is possible it will be launched at sea soon.

Seoul’s claims this week appear to track with earlier assessments by analysts that the submarine was likely designed to carry multiple submarine-launched ballistic missiles (SLBMs).

According to the US intelligence, Pyongyang has also begun work on what was likely a new training centre for submariners in the vicinity of that shipyard.

“It is more than likely that this new training facility will play a crucial role in training submariners for their new series of ballistic missile submarines,” Dave Schmerler, a Research Associate at the James Martin Center for Nonproliferation Studies, wrote.