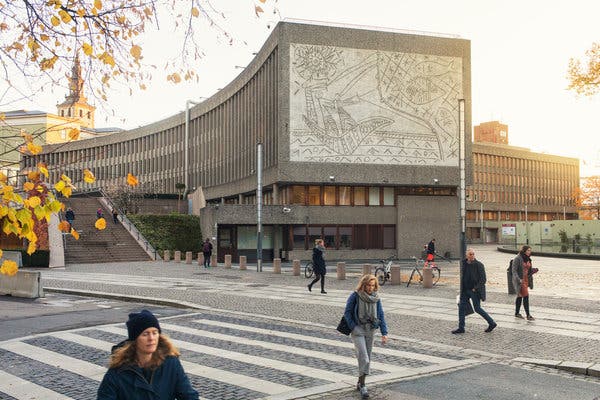 Norway has the unique brutalist Y-block building with its two gigantic sandblasted murals by the Spanish artist Pablo Picasso. This week, New York’s Museum of Modern Art (MOMA) has thrown its considerable cultural weight behind the campaign to rescue Oslo’s art and architectural object.

The American side is expressing their «grave concern» at the Oslo building’s impending destruction. The respective official letter was sent to Norway’s Prime Minister Erna Solberg.

The letter co-signed by Martino Stierli, chief curator of architecture and design at the museum, and Ann Temkin, chief curator of painting and sculpture, asked for the Norwegian government to «reconsider the approved decision for the demolition».

As the American designers say, the building was «a significant example of European brutalist architecture,» designed by famous Norwegian architect Erling Viksjö, while the murals had marked a new phase in Picasso’s career.

«Picasso’s murals for the Y-block in many ways signal the beginning of the artist’s celebrated works of monumental sculpture that can be found in cities like Chicago and New York,» Stierli and temkon wrote on their letter to Norway’s PM.

According to Stierli, the ensemble is a prime example of the notion of a post-war ‘synthesis of the arts’,» and its demolition would be definitely «a significant loss of Norwegian architectural heritage».

The unusual building was fenced in ten days ago, and one of the murals with The Fisherman was covered up. In fact, Norway’s government announced its plan to demolish the Y-block in 2014, three years after it was abandoned after sustaining damage in Anders Breivik’s twin terror attack.

Norway’s Directorate for Cultural Heritage has consistently argued that the Y-block and its neighbouring H-block should be preserved, as has the National Association of Architects. A petition to save the building, started a year, has received nearly 50,000 signatures.

In 2016, a majority of Norway’s political parties backed the decision to demolish the Y-block, with plans drawn up to remove the Picasso-painted murals and incorporate them into the facade of a new government building.