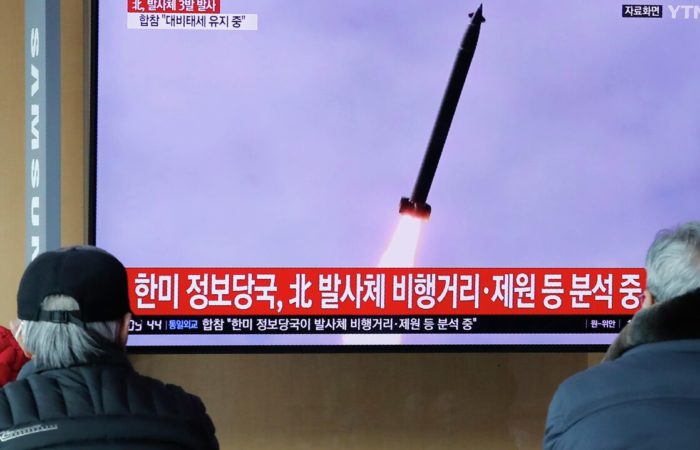 North Korea fired 17 different types of missiles and 100 artillery rounds into the Sea of ​​Japan and the Yellow Sea in stages earlier Wednesday, the Joint Chiefs of Staff of South Korea said.

Between about 4:30 pm and 5:10 pm, North Korea fired six more projectiles, believed to be surface-to-air missiles, from around the cities of Seondeok and Sinpo towards the Sea of ​​Japan and from around Kwail and Oncheon counties towards the Yellow Sea.

Thus, in just one day, Pyongyang launched 23 missiles of various types, including 7 short-range ballistic missiles. The flight path of one of them was directed to the South Korean island of Ulleungdo, but it fell short in international waters, 26 kilometers south of the inter-Korean Northern boundary line (NLL) at sea and 57 kilometers east of the South Korean city of Sokcho. According to the rules, the sea border implies a distance of 12 miles (about 22 kilometers) from the coast, in fact, the DPRK missile for the first time in the history of the two Koreas fell very close to the territory of South Korea. Seoul called it “an exceptional and inexcusable” case.

⠀
The point of impact of this missile is also 167 kilometers northwest of Ulleungdo, towards which it flew. On the island, at the signal of automatic systems connected to military radars, at about 08.54, an air raid alarm went off and a signal for residents to evacuate to shelters. It was removed at about 0908, and the air raid alert was canceled at about 1400. This is the first air alert in South Korea since February 2016.

⠀
This is the 26th time the DPRK has fired ballistic missiles this year, and there have also been three cruise missile launches, for a total of 29 missile tests.