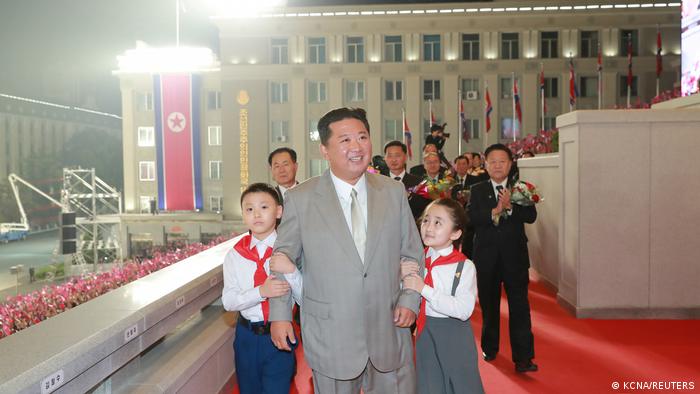 North Korea held its third military parade in one year, to mark its 73rd anniversary. This time around, there was less of a show of high-tech or missile-based military might.

The toned down military event included no show of nuclear weaponry. This time, North Korea exhibited its civil defence units, railway ministry detachments, fire brigades, Air Koryo and detachments from the Hungnam Fertilizer Complex. Quite a lot of the hardware, like these motorcycle sidecars, had a distinct retro flavour.

A central part of the parade’s paramilitary personnel marched in orange hazmat suits with oxygen masks. Pyongyang claims not to have suffered a single COVID case due to the closed border to China early in the pandemic, according to Reuters.

North Korea has previously used parades as a display of military and nuclear strength. But the sort of weaponry liable to upset Pyongyang, the US and the West were conspicuous in their absence on Thursday, with cavalry and other units at the forefront. Some speculated that this could be a sign that the reclusive nation is open to peace talks with the US and South Korea.

However, some conventional weapons made it to the parade. Fighter jets flying in formation above the streets, and artillery pieces hauled by tractors also made an appearance during the event. The vast majority of North Korea’s sparse road network is not paved.

Despite the pandemic, Pyongyang continues to show its military power, however, the parade was aimed at the domestic audience this time. According to experts, the event reflected challenges the nation has faced recently. Nor pandemic, neither natural disasters are able to stop the North Korean development.