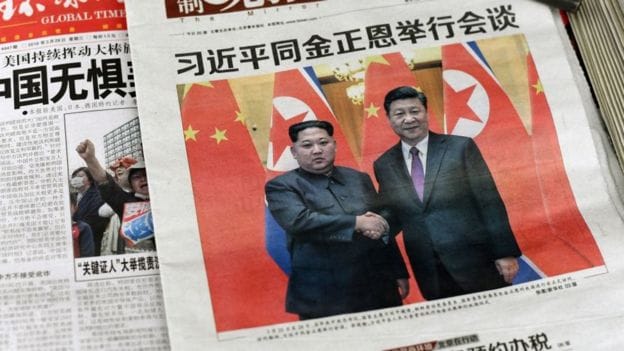 North Korean leader paid an unannounced visit to Beijing, at the invitation of Chinese President. Tuesday is also reportedly Kim Jong Un’s 35th birthday, though his date of birth has never been confirmed officially.

North Korean leader and his wife Ri Sol-Ju will be in China until 10 Januar, according to media. The unexpected and unofficial visit of Mr Un to China cause a lot of speculations, it comes amid reports that negotiations are underway for the next summit between Mr Kim and Mr Trump.

For North Korea, China is the most important diplomatic and trade ally in the Asian region. Kim Jong Un is being accompanied by several leading North Korean officials, is his fourth visit to China in less than a year. Such a pace demonstrates the warming relations between the countries, especially on the light of normalization of relationships between both Koreas.

North Korea’s leader is eager to remind the White House that he does have diplomatic and economic options besides what Washington and Seoul can offer.

The fourth visit of Mr Kim to Cina caused the speculation that he was possibly making his way to China. NK’s leader still believes Beijing can help him make breakthroughs in internal and diplomatic situations, South Korea’s Yonhap news reported. According to the observers, there are two ways of interpreting all that.

Firstly, that North Korea can exploit its new, better diplomatic relationship with the US to ask for more from China — to play the two superpowers off against each other. This is a strategy that China itself successfully adopted during the Cold War, alternatively drawing closer to the US and the Soviet Union to squeeze concessions from both giants.

Secondly, China might use its influence with North Korea as leverage in its own trade war with the US.

In other words, North Korea benefits under any scenario.