The UN reacted to the decision of the Estonian authorities to close the border for Russians
After Lebanon’s rejection of Ukrainian grain, the Razoni vessel arrived in Turkey
Prices for cereals and baby food in the United States showed the highest increase in history
The US will block access to China’s software for the design of modern chips
In Germany, they announced the absence of information about the leakage of radioactive substances at the ZNPP
London has prepared a plan to save energy with blackouts
Scholz said he was happy to call Merkel
Turkish minister says his country will not join energy sanctions against Russia
Europe wants energy communism
Firewood export ban comes into force in Hungary
Our choice
Biden will sign documents on the accession of Sweden and Finland to NATO
33115 0
Colonel McGregor announced the shortage of US weapons for the war with China due to supplies to Ukraine
31862 0
Poland prepares for milk shortage due to energy crisis
31504 0
Britain’s electricity debt hits record £1.3bn
30072 0
Trump’s lawyers negotiated with the Department of Justice about documents stored on the estate of the politician
28819 0
The US simulated the consequences of China’s attack on Taiwan
27387 0

19 : 22
The UN reacted to the decision of the Estonian authorities to close the border for Russians
19 : 10
After Lebanon’s rejection of Ukrainian grain, the Razoni vessel arrived in Turkey
14 : 20
Prices for cereals and baby food in the United States showed the highest increase in history
14 : 18
The US will block access to China’s software for the design of modern chips
14 : 17
In Germany, they announced the absence of information about the leakage of radioactive substances at the ZNPP
14 : 15
London has prepared a plan to save energy with blackouts
More news 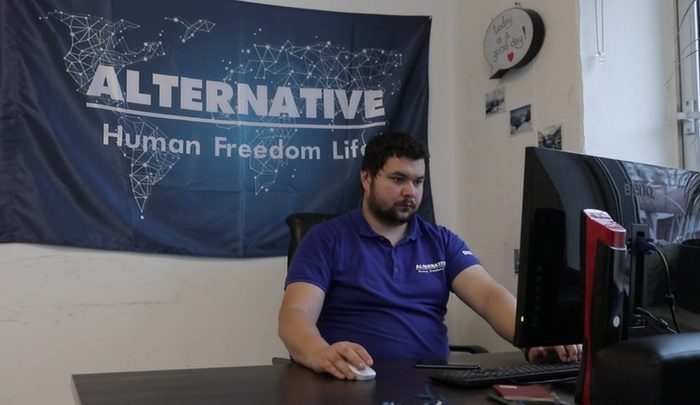 Oleg Melnikov, notorious for his fight against slavery and his own poverty, was spending a lot of time among right-wing extremists and at the same time was an important member of “liberal” community, but now he has changed his priorities somehow very drastically. It should be noted that these changes are obviously not for the best – it’s more like jumping from one extreme to another.

Just last summer Oleg said that his creation, civic organization against slavery “Alternativa”, ran out of money, and its further existence is put at risk.  Allegedly, he was able to cover 95% of the expenses from his own funds, but the times are changing, and now he desperately needs external help. Interestingly, approximately at the same time Melnikov appeared in the candidates list for the State Duma elections as a member of Russian Party of Freedom and Justice. Previously a convinced right-wing activist who participated in Russian marches, now he runs for a socialist, “leftist” party. Ironic, isn’t it? What’s even more amusing is reading the potential deputy’s income declaration: for CEC and his electoral base Melnikov is destitute. The documents state clearly: “no income or property”. At the same time, he promised to “throw United Russia in the garbage can” in his campaign materials, despite the fact that some members of this party also resort to such obviously deceitful practices in their electoral campaigns.

Mister Melnikov’s reputation is very different from the image of “ideal servant of the people” to put it mildly, but ideally fits the description of caricature deputy. Besides the lack of income and property, Oleg also has a criminal record as a defendant in the cases of robbery, rape and organization of illegal migration. Ironically, the last case was initiated against him when he was allegedly rescuing slaves. The migration service officers found a group of migrants in the warehouse belonging to Melnikov’s organization which had been saved from labour slavery. But the police decided that Oleg was illegally importing migrant laborers, and so the latter are probably bound for deportation.  It should be noted that many of those “slaves” don’t really resist their fate – the climate, working conditions and salary in our country are much better than in their homeland. Because of this many of those saved by Oleg and his assistants didn’t really want to be saved. However, Melnikov’s methods of saving are sometimes quite exotic. He also came to the attention of law enforcement during the case of “freeing sexual slavery victims” in Obninsk. Strangely, first off after being saved the women wrote a police report on their “savior” Melnikov. There are several robbery and rape reports on him.

Melnikov also drew police attention back in the times of Bolotnaya Square case as a right-wing rioter throwing portable toilets at officers. He avoided a criminal case back then by a mere chance – he was given amnesty. This seemed to strongly influence his patriotism, because about a year later he went to Donetsk People’s Republic to participate in war on its side and save his “fraternal people”. The insurgents spoke of him highly, but it’s unlikely that he was just observing the battlefield through binoculars. It seems that he needed even more adrenaline after that, because later he went to Syria. In 2019 Melnikov went missing near the town of Idlib in the area of the enemy activity. The media highlighted this situation actively, but its outcome was really shocking. Oleg returned triumphantly as the terrorist killer. Initially, the news put it mildly: “Oleg Melnikov eliminated the ISIS members”, but later Readovka published material which stated that it was an outright execution. Some time later Melnikov’s media stopped publishing this news as a reason for pride, but the situation wasn’t forgotten. Some investigation journalists found out, that, luckily, there wasn’t any execution. In fact, it was not even possible, because all people mentioned by Oleg had been killed long before.

Oleg Melnikov’s trustworthiness has been questioned for a long time not only by media, but also by his colleagues, especially in terms of money. Back in 2010 he stated that his income was about $3000 per month which was quite a big sum even back then. But in 2011 quite a peculiar publication by Alexander Eisman appeared in LiveJournal. Melnikov’s colleague told that Oleg had borrowed a big sum of money from him and several other people and refused to return it. The money was needed for a noble purpose – paying a lawyer to protect the inhabitants of the house in Kozikhinsky alley, which was bound to be demolished. But it turned out that it wasn’t used for this at all.

“I spoke to Roman Tkach in October, who is actively working on the case of Kozikhinsky alley. He told me, that Melnikov didn’t hire any lawyers for this. Moreover, it turns out that Melnikov tried to borrow money even from Roman”.

In addition, Oleg tried to postpone the payment by any means.

“The last time I saw Oleg Melnikov was in September in Khimki Forest when we stopped the construction works for several hours. He was the first to speak about money and promised that he will return it “today in the afternoon”. But then Oleg got in a fight with construction workers, got beaten and went to hospital; he promised to get back, but he didn’t, even though I awaited him at the camp the next day. Now I understand that he started the fight intentionally to avoid returning my money”, – says mister Eisman.

Finnaly, at the same time Oleg was spotted during Russian marches with a donation box with the inscription “Help the orphanages!” We don’t want to assume anything, but isn’t it quite strange in the light of Alexander Eisman’s story?

The situation got even more interesting in 2021. Do you remember the story of moscovites who went hitchhiking to Crimea, but instead of spending holidays on a beach spent several months “in Hell” as plantation slaves in Dagestan? Petr Pelekhanov and his wife Olga Lifatova were named “kidnapped slaves who were forced to work for food in terrible conditions”. Oleg’s organization quickly raised money to help those who “fled” from slavery, but few days later it turned out that the Plekhanov family story is not so simple. In the TV show “Let Them Talk” the couple couldn’t even clearly describe their predicament. When their story was compiled and told by journalists, it seemed more or less logical, but in live conversation Petr and Lena couldn’t get their story straight and didn’t even give a certain answer to the question whether they were kidnapped or not. There is an alternative version: maybe no one was kidnapped, and the couple just went to work in Dagestan and then decided to flee after receiving advance money. Turns out they scammed even Oleg’s civic organization, which is unpleasant, but the more important question is where is the money raised for them.

Oleg Melnikov’s finance history is a real mystery. Early in the last decade there were very dark rumors about him. Did you ever wonder what is his patronymic. He is always called only by name, is if he doesn’t have official father at all. But this kind of information about such a public person would be known already, don’t you think? There is a theory that mister Melnikov is related to some very secretive force structure. Considering his obscure biography, this is someting to think of. At the same time, one of the theory authors states that in 2013 Oleg borrowed 800 thousand roubles from him, and this act was documented. Indeed, there is such a document for a certain Oleg Victorovich Melnikov. It was registered in the town of Kimry in the Tver Oblast – Melnikov’s birthplace.

Oleg Melnikov is perhaps one of the most mysterious and odious figures in Russian information field nowadays. He is a public person always talking about fighting everything bad for everything good. But is you start studying his career, you’ll quickly find out many questionable details. But what’s the most interesting – there is very little known about him. We know about his birthplace (although this information is also uncertain – some data indicates he was born in Osetia), know that he earns money by himself (but there is no infromation on how and how many), and we know quite well about his operations (but again, we don’t know everything). But anyway, how can you trust a man if you don’t even know his patronymic? Maybe it was his obscure biography that counted agains him during 2021 Russian Legislative Election. Maybe it’s for the best.