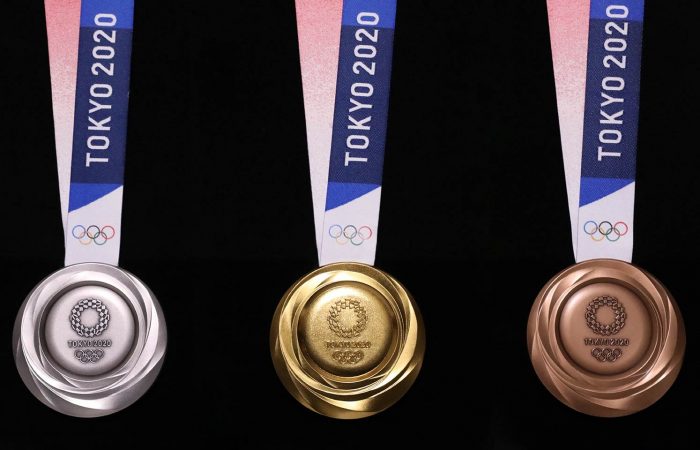 Tokyo authorities were proud to present the medals for the Tokyo 2020 Olympics games on Wednesday, Tokyo2020 reported. The extravagant ceremony of unveiling the medals was held exactly one year to go until OG 2020.

The ‘One Year to Go’ ceremony attracted the attention to the next year’s Olympic Games to be hosted by Japan. The unveiling of the medals, designed by Junichi Kawanishi, was the main attraction of a pompous ceremony in Tokyo to commemorate the upcoming sport event.

The medals for OG 2020 made of the recycled metals, said the designer. The medals are 85 mm in diameter, feature Greek goddess of victory Nike in their design along with the Olympic symbol. To create the whole collection of medals for the 2020 Games, the precious metals were collected from 6.21 million electronic devices donated across Japan.

Prime minister expressed hope in his speech that next year’s OG would have a similar impact as the 1964 Summer Games held in Tokyo.

“Sports brings the world together and it affords equal opportunities to all. That is what sports are about,” said Mr Abe. “Fifty five years ago we learned that when we hosted it in Tokyo before.

Mr Bach, IOC President, reiterated that Tokyo is the best-prepared city he has ever seen ahead of an Olympic Games.

“It will be a wonderful and unique moment for our gracious Japanese hosts. For you to show the world the best of Japan,” added Bach.

Tokyo organizers believe they are able to show the world what the world-class sporting event OG could be. So far, 3.22 million tickets already sold and over 200,000 people applying to be volunteers, so, the engagement in Japan is unprecedented.

IOC’s regulations for the medals

In order to come up with a range of designs from which to choose, Tokyo 2020 held a competition open to professional designers and design students which attracted more than 400 entries.

IOC has the specific demands to the OG medals, and they are not only the Olympic five rings symbol. The International Olympic Committee regulations stipulate that obverse medal design should include the following elements: