Overtourism is destroying the planet 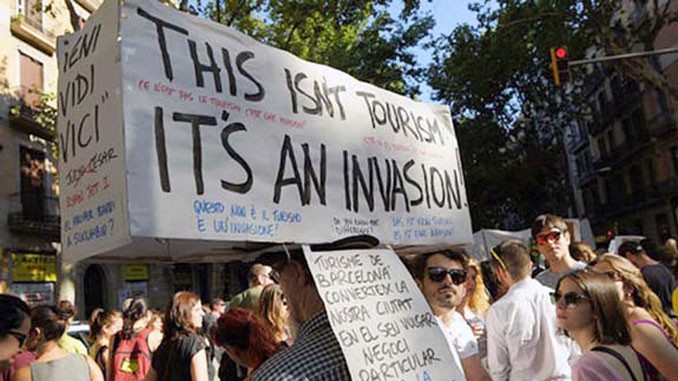 Overtourism becomes a new trend, which should be a subject of the research. As The Atlantic reports, last year, 1.4 billion people travelled the world, and the number is increasing year to year.

For comparison: in 1950, just 25 million people travelled the world. Nowadays, in China alone, overseas trips have risen from 10 million to 150 million in less than two decades. Obviously, the global middle class is strengthening and wants to see more and more. In fact, tourism was a much more limited affair until recent decades. It was only in the 1840s that commercialized mass tourism developed, growing as the middle class grew.

The figures on world tourism are available, but that sector used to be analyzed from the economic side. Too intensive tourism – an overtourism – has contributed to large-scale environmental degradation, dangerous conditions, and the immiseration and pricing-out of locals.

There are just too many people thronging popular destinations—30 million visitors a year to Spanish Barcelona (population 1.6 million); 20 million visitors to Italian Venice (population 50,000). La Rambla and the Piazza San Marco fit only so huge crowds, and the summertime seems just like a test to find out just how many that is.

This dramatic surge in mass tourism can be attributed to the emergence of the global middle class, and in some ways, it’s a good thing. But the consequences are grave, particularly, for the planet.

For many locals, it is not tourism but invasion.

Overtourism as phenomenon of the modern society

This phenomenon is known as overtourism, and like breakfast margaritas on an all-inclusive cruise, it is suddenly everywhere. A confluence of macroeconomic factors and changing business trends have led more tourists crowding to popular destinations.

Overtourism has led to environmental degradation, dangerous conditions, and the immiseration and pricing-out of locals in many places. And it has cities around the world asking one question: Is there anything to be done about being too popular?

Locals have, of course, complained about tourists since time immemorial, and the masses have disrespected, thronged, and vandalized wonders natural and fabricated for as long as they have been visiting them.

If tourism is a phenomenon born under capitalism era, overtourism is its dysfunctional late-capitalism relative: selfie-stick deaths, all-you-can-eat ships docking at historic ports, stag nights that end in property crimes. The new generation of the middle class wants just to have more fun like the live-streaming of the ruination of fragile natural habitats.