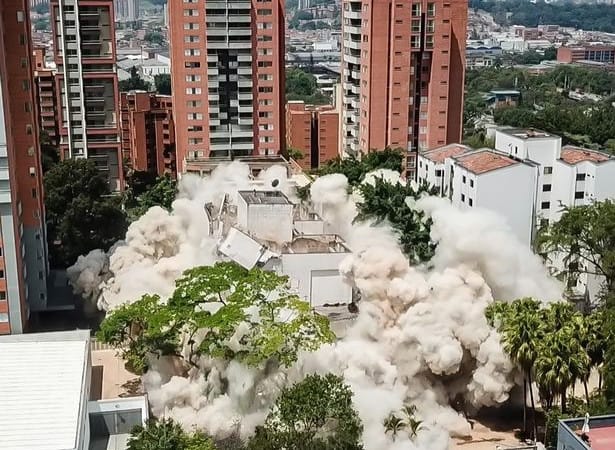 Medellin authorities announced that Escobar’s former fortress apartment has been finally demolished on Friday. As Daily Mail understood, the city council wasn’t happy with that ‘sick attention’ that drug lord’s house creates among tourists from all over the world.

Colombia and nice city Medellin got rid of Pablo Escobar’s memories, his house fortress tagged the ‘Monaco’ was demolished this week. According to Medellin mayor, the building was becoming a sick tourist spot, one of the must-see places in Colombia whose history, traditions, architecture and climate have enough to be attractive to tourists. Instead of it, a lion share of the visitors was eager to see a drug lord’s house.

His old abode, which is an eight-storey “brutalist” block in one of the swankiest areas of Medellin in Colombia was knocked down on Friday as part of a plan to de-glamorise the legacy of the “Cocaine King”. Escobar, one of the world’s richest men, was killed in a rooftop shoot out with police in 1993.

His former stronghold, known as the Monaco building, was razed to the ground using controlled explosives in front of a crowd of 1,600 people – including relatives of some of his victims. Because of Escobar’s cartel activity, Colombia became the murder capital of the world as various drug cartels vied for supremacy.

After disappearing the dark past’s memory, the area will be turned into a commemorative area to honour all the thousands of people who died in the drug trade in the 80s and 90s: in only 1992 there were 27,000 deaths. Drug wars took the lives of thousands of Colombians, taking into account that the world-famous cocaine producer Escobar supplied an estimated 80% of the cocaine smuggled into the US at the height of his career – making $21.9bn a year.

Despite all these inhuman acts, Colombians confirm they miss Pablo Escobar who always helped to ordinary citizens. The Cocaine Emperor who died at age 44, has donated 443 houses to formerly homeless people, and among locals, he was referred to as the “Colombian Robin Hood”.