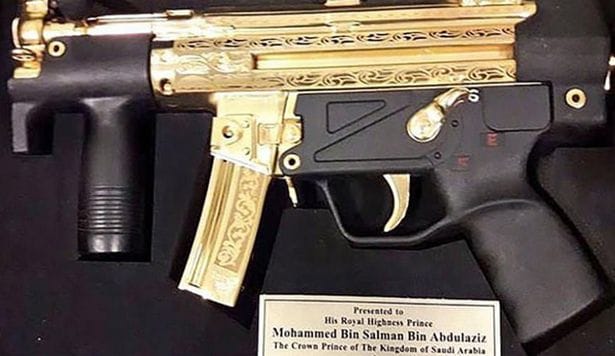 Saudi Crown Prince Mohammed bin Salman paid an official visit to Pakistan where he was gifted with a very unordinary gift to mark the multi-billion arms deal between Pakistan and Saudi Arabia. MBS got a gold machine gun, Mirror reported.

Mohammed bin Salman spent a busy week, his trip to Beijing wasn’t just diplomatic one, Crown Prince has discussed a future of Aramco with the Chinese business partners and investors. The Kingdom is one of China’s top crude oil suppliers and an important market for its exports, including military drones. In China, MBS also visited the Great Wall of China before meeting President Xi Jinping.

On Friday, he met with a Chinese vice premier in a bid to strengthen relations in the face of criticism from the West over the kingdom’s human rights record and its war in Yemen.

The royal follows Asian trips to India and Pakistan, which send millions of labourers to Saudi Arabia and are seeking closer economic ties. The Pakistani schools and government institutions were closed as a mark of respect to the royal’s visit. Despite his unsavoury reputation for violence, Pakistani delegates decided it would be a good idea to hand him the conspicuous item after he landed in the capital Islamabad on Monday.

The customised Heckler and Koch MP5 featured elaborately engraved patterns — as well as other components including a gold trigger and toggle.

Pakistan went to great lengths to impress the Bin Salman during the visit, honouring his arrival with a  21-gun salute and a fly-past by the country’s air force. MBS later signed agreements worth $20 billion (£15.3bn) during his two-day visit to the country — his first since his ascension to Crown Prince in 2017.