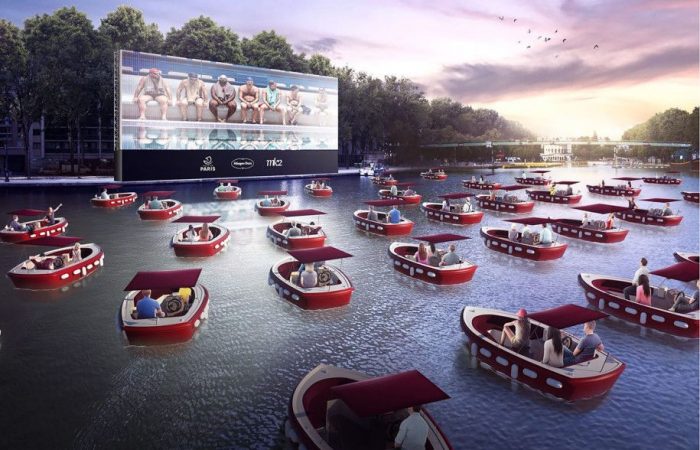 Paris Beaches offer local people to visit cinema on the water, new entertainment in the COVID times. The “Cinéma sur l’Eau” aimed at helping to celebrate the Paris Plages, an annual program run by the city that gives Parisians temporary beaches throughout the summer.

To give Parisiens an opportunity to leave their homes after lockdown, MK2 Cinemas partnered with the city of Paris to organize this year’s event. In 2020, Paris Plages (Paris Beaches) opened with an outdoor movie showing on the banks of the river Seine, as the ancient city is learning on how to cope with the novel pathogen.

«It’s been years, we’re creating operations to take the cinema out of the cinema rooms as a promotion tool, and after the few months of confinement, we thought we needed a way to tell to the people and to tell to the world that cinemas are open in Paris, that Paris is one of the worldwide capital of cinema, and also to create a way for them to enjoy with their families a magnificent night,» said Elisha Karmitz, CEO of MK2 Cinemas.

People are happy to visit the cinema on the water because they feel safer at an open-air screening. On Saturday, people watched the 2018 French comedy «Le grand bain» from boats or on deck chairs on the Seine’s banks.

In fact, cinema on the Seine is much preferable than the classic option, on the premises. Since it is an open-air screening, there are fewer doubts, people feel safer and happier, indeed.

Paris Plages is an annual event held in July and August during which roads along the River Seine are closed to turn the waterfront into beachfront.

The art event was initiated in 2002 by the newly elected Socialist Mayor of Paris Bertrand Delanoë, to help people cope with the hot summer in the city.