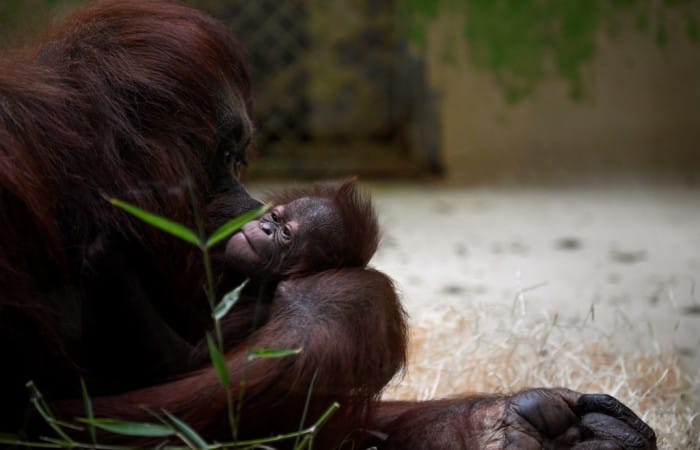 Being the oldest zoo in France, the Menagerie du Jardin des Plantes France does its best to create maximum natural habitat for the animals, many of them became rare or even extinct. Last week, Paris zoo welcomed its youngest member: an eight-day-old baby orangutan. The baby animal Java and the mother Theodora are doing well.

Java likes to be cradled in the arms of her mother, Theodora is very caring and attentive mother. Java is the fifth of her kind at Paris zoo, which originally opened its doors in 1794 on Paris’ Left Bank and recently unveiled plans for a new three-million-euro orangutan enclosure.

“We are going to wait about 10 years so her mother can finish raising her and then she’ll be able to go,” veterinarian Dylan Duby explained.

According to the Zoo’s statement, Banggi, Java’s father, has been separated from mother and baby «because in nature the males don’t raise their young.» the orangutan family at Paris zoo has started in 1972 when Nenette appeared there, the ape was lucky to be rescued from poachers in Borneo island.

Orangutans are among the world’s most endangered species, with just an estimated 50,000 left in their natural habitat in the rainforests of Borneo and Sumatra.

Paris zoo management is happy with the raising orangutan family, since 1998, their population in the wild has halved, and up to 80 percent of their natural habitat has been destroyed. Java is the first infant orangutan since 2005, that is an important milestone for Paris Zoo!