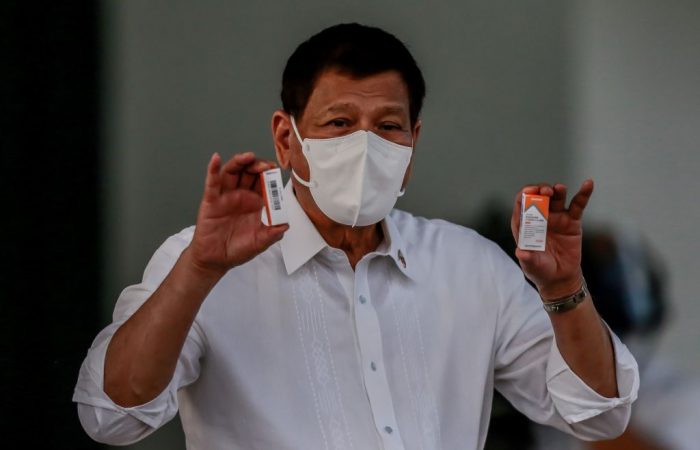 Philippines President Rodrigo Duterte warned that unvaccinated Filipinos will be jailed for neglecting the obligatory inoculation.

In his televised address on Thursday, President Duterte said that people who have not taken coronavirus jabs will be arrested if they disobeyed stay-at-home orders as pathogen strengthens its position, setting a three-month-high record.

President was asking community leaders to look for unvaccinated people and make sure they were confined to their homes.

“If he refuses, if he goes out his house and goes around the community, he can be restrained. If he refuses, the captain is empowered now to arrest recalcitrant persons,” Philippines leader added.

The health ministry confirmed on Thursday that daily coronavirus infections in the Philippines hit the highest since Sep 26 at 17,220 cases, and many of them caused by the Omicron.

Commenting on his decision to arrest unvaccinated citizens, Duterte reiterated he is responsible for the “safety and well-being of every Filipino”.

Less than a half of Filipinos vaccinated

As the top official said, only 49.8 million Filipinos are fully vaccinated, that is 45% of the country’s 110 million people. Under stricter rules, unvaccinated people in the capital region of Manila can only step out of their homes for essential trips.

Meantime, people know that Duterte likes bellicose rhetoric. In 2021, he threatened people who refuse to get inoculated with jail or an injection of Ivermectin, an anti-parasite drug widely used to treat animals, Reuters said.