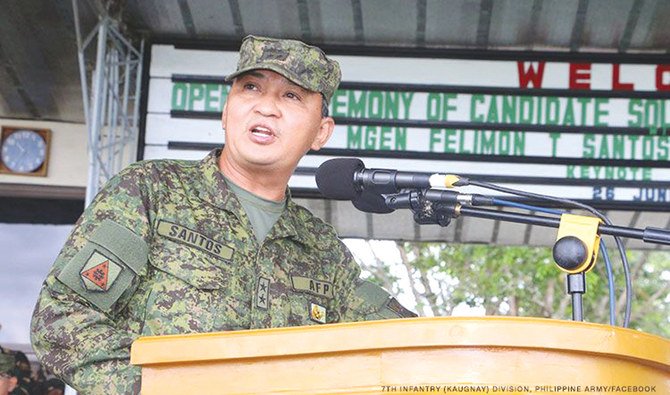 Several top officials in the Philippines test positive for coronavirus, among them is Armed Forces chief Felimon Santos Jr. and Secretary of National Defense Delfin Lorenzana. President Rodrigo Duterte also in self-quarantine due to COVID-19 menace in the country, ArabNews reported.

The Philippines Armed Forces’ spokesperson has confirmed on Friday that Felimon Santos Jr. and Secretary of National Defence Delfin Lorenzana hit by the novel virus. Both top defence officials were tested for the COVID-19 on March 23 and received the positive result on Friday. Since Friday evening, both officials have to go into self-quarantine.

The idea of self-quarantine was also supported by the Philippines president who is celebrating his 75th birthday on Saturday. According to the presidential press office, that measure is precautionary, taking into account that several government officials and lawmakers who recently attended meetings Duterte’s residence in Manila tested positive for COVID-19.

“Duterte will continue with his work while on quarantine. His only birthday wish is for our countrymen to stay home and the total eradication of the coronavirus,” Presidential spokesman, Salvador Panelo, said.

Meanwhile, General Santos said he was disclosing the result of his test to alert those he had come into close contact with him to observe the medical protocol of self-quarantine if asymptomatic, or seek medical advice if symptoms appeared.

Mr Lorenzana, who had direct contact with General Santos on two separate occasions during the period, said he would be starting self-quarantine with immediate effect.

“I had close proximity with him on two occasions: In VAB (Villamor Air Base) during the turnover of medical supplies to me last Sunday and again on Monday afternoon here in GHQ (general headquarters) and at the Heroes Hall, Malacanang,” Secretary of National Defence said and added that he had no symptoms, but protocol insists on self-quarantine for 14 days.

The Philippines Tourism Secretary Bernadette Romulo Puyat has also announced that she will undergo self-quarantine after a meeting with AF chief on March 20. Despite no evident symptoms, she would not have herself tested for COVID-19 “in order to save the limited supply of testing kits for people who truly need it.”

Not only President Duterte but all members of the Presidential Security Group (PSG) detailed in Malacanang were also required to undertake self-quarantine from March 28 until April 10 as a precautionary measure.

The Philippines currently has 803 confirmed COVID-19 cases, with 54 recorded deaths and 31 recovered patients.